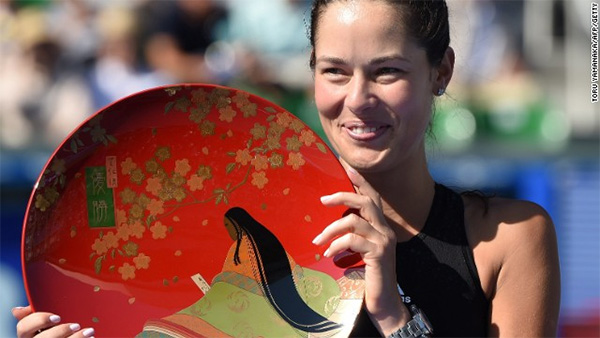 (CNN) — A battle of former World No.1’s in Tokyo saw Ana Ivanovic continue her 2014 renaissance with a fourth title of the year as she beat Denmark’s Caroline Wozniacki in the final Sunday.

It’s been a fine year too for Wozniacki, capped by a runner-up spot to Serena Williams in the U.S.Open, but she proved second best to her Serbian opponent, who won 6-2 7-6 in the final of the WTA Pan Pacific Open.

It stretched Ivanovic’s career tally over Wozniacki to five wins against two, the victory wrapped up in 99 minutes.

“It was a really good battle out there — there were some very tough moments, especially in the second set,” Ivanovic told the official WTA website.

But I just tried to take it one point at a time, and I’m really happy to make it through. It’s just an amazing feeling to win this title.”

Having taken the opener with three breaks of service, Ivanovic had trailed 3-1 early in the second, but fought back to level at 4-4.

It eventually went to a tiebreak, won 7-2 by Ivanovic, who wrapped up the title and the near $200,000 first prize with a forehand down the line,

“I tried to serve and return well. I tried to play the first couple of balls out wide so she has to run for it,” was the verdict of the beaten Wozniacki. “Ana was playing very aggressively.”

While Ivanovic and Wozniacki have gone some way to booking their place in the end of season WTA Tour finals in Singapore, another former world number one, Victoria Azarenka of Belarus, has called quits on her season.

Azarenka, who started the year second-ranked behind Serena Williams, has been plagued by a foot injury and has decided to withdraw from the remainder of this year’s tournaments to help her recovery.