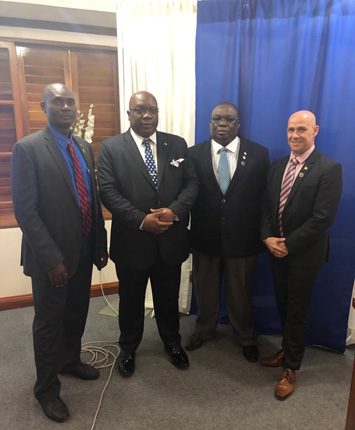 This year’s Exercise Tradewinds is one of the matters being discussed at the Regional Security System (RSS) Council of Ministers’ Meeting in St. Vincent and the Grenadines, where Prime Minister and Minister of National Security, Dr. the Honourable Timothy Harris is leading a delegation from St. Kitts and Nevis that includes Lt. Colonel Joseph Anthony Comrie of the St. Kitts-Nevis Defence Force and Acting Police Commissioner Hilroy Brandy.

Tradewinds is a U.S. Southern Command (SOUTHCOM)-sponsored maritime security and disaster response exercise executed annually to strengthen the security of the Caribbean region.  Phase 1 of Exercise Tradewinds 2019 is set to take place in the Dominican Republic, while St. Vincent and the Grenadines will host Phase 2 from June 14th to 20th, 2019.

SOUTHCOM, located in Doral, Florida, is responsible for the United States’ security cooperation in the 45 nations and territories of Central and South America and the Caribbean Sea, which represent an area that covers more than 16 million square miles.

Today, Friday, April 5th, 2019, Lt. General Mike Plehn, Military Deputy Commander of SOUTHCOM, was a guest speaker during the opening session of the meeting in St. Vincent and the Grenadines, as well as United States Ambassador to Barbados and the Organization of Eastern Caribbean States (OECS), Her Excellency Ms. Linda Taglialatela.

Last year, over 500 military, law enforcement and civilian personnel from roughly 20 partner nations convened in the Federation of St. Kitts and Nevis for what was, by all accounts, a very successful first phase of Exercise Tradewinds that ran from June 4th to 12th, 2018 ahead of the second phase held in the Bahamas.  St. Kitts and Nevis also hosted Phase 1 back in 2015 between May 31st and June 9th.

During today’s meeting at the Beachcombers Hotel, Prime Minister Harris and his delegation shared the successes and best practices of the first phase of Exercise Tradewinds 2018 in order to assist the planning stage for 2019.

Captain Kayode Sutton of the St. Kitts-Nevis Defence Force, the local agency that took the lead in ensuring Phase 1 of Exercise Tradewinds 2018 was successful, said in an interview last year that St. Kitts and Nevis has an impressive track record of innovation when it comes to hosting the maritime security and disaster response exercise.

“Tradewinds coming back [in 2018] to St. Kitts and Nevis in such a short cycle indicated that the experiences in 2015 were highly successful – that is why we are getting the opportunity to host again,” Captain Sutton said last year.

“For example, it was in 2015 here in St. Kitts and Nevis that we introduced the use of Unmanned Aerial Vehicles [drones] to the exercises and training cycles in Tradewinds, and since 2015 every Tradewinds exercise that took place in 2016 and 2017 drones were involved.  They actually employ the drones from the St. Kitts-Nevis Defence Force (SKNDF)… it was highly successful and it is part of Tradewinds now,” Captain Sutton added.

During the planning stage for Phase 1 of Exercise Tradewinds 2018, the Royal St. Christopher and Nevis Police Force provided invaluable support to the SKNDF, and so did NEMA – the national disaster response focal point – and its Nevis counterpart, the National Disaster Management Department, as well as Customs, Emergency Medical Services (EMS) and the Ministry of Health, Immigration, the Red Cross, and other agencies and organizations that were critical to the success of Tradewinds, such as the Ministry of Foreign Affairs and the media.

The RSS is the military support unit for the OECS sub-region.  Its membership comprises the independent countries of the Organization of Eastern Caribbean States, namely Antigua and Barbuda, Dominica, Grenada, St. Kitts and Nevis, Saint Lucia, and St. Vincent and the Grenadines along with Barbados, which is a Caribbean Community (CARICOM) Member State.  RSS Council Members comprise Government Ministers who hold responsibility for the National Security portfolio in their respective countries.