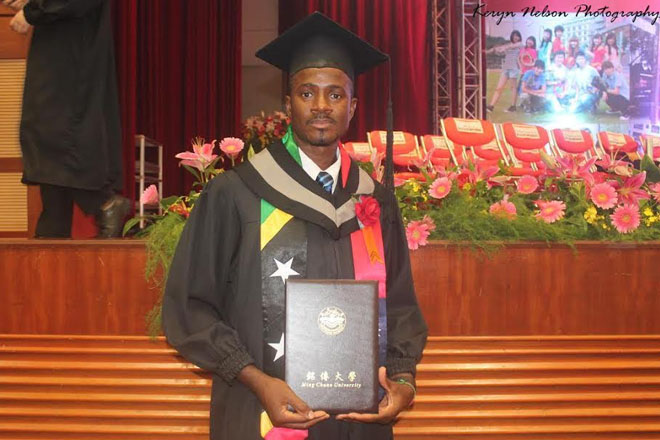 Another Kittitian graduates from University in Taiwan, receives ‘distinguished award’

Taipei, Taiwan — The federation of St. Kitts and Nevis’ flag was displayed amongst others as a son of its soil joined his classmates in the 2015 graduation procession held at the Ming Chuan University (MCU) in Taipei, Taiwan, on Sunday (June 13th).

After four (4) years of studying at one of Taiwan’s top private universities, Mr. Lindbergh Belle, a former teacher at the Washington Archibald High School is now a proud holder of a Bachelor’s of Science in International Business and Trade degree.

“I feel a sense of joy, pride and elation; this is a major stepping stone in the journey of my life. I worked hard to get to this day, and my work did not go to waste,” said Lindbergh.

At a ceremony that was held for the International College graduates, Lindbergh was amongst a few to receive a special ‘distinguished award’. He and the others were recognized for ably engaging in different areas of development.

During his school life he also had other accomplishments. He emerged as the winner of an elocution contest organized by MCU HIV/Aids group. For this contest students from five different universities spoke on a number issues related to HIV/Aids as part of a campaign to highlight the plight effects and stigmatism attached to the disease.

In 2012, he again joined another competition but this time as a student researcher and won the first place prize in the Agriculture and Fisheries section which was organized by the International Cooperation Development Fund (ICDF). His paper focused on how cooperation between Taiwan (ICDF) and the Federation of St. Kitts and Nevis can enhance sustainable food production and improve trade opportunities, and also proposed the establishment of an aquaculture farm.

The federation’s representative to Taiwan, Ambassador Jasmine E Huggins and students attended the graduation in support of Mr. Belle. She congratulated and also encouraged him to return home to contribute to the development of the nation, his community and his family.

“I want to congratulate Lindbergh on his outstanding achievement, not only did he graduated this year from Ming Chuan University but he was awarded an honorary prize,” said Ambassador Huggins,

“He follows in the fine tradition of all of the graduates from St Kitts and Nevis and it is my hope that he goes back to the federation and makes a contribution to the development of his nation, his community and most of all his family.”

Belle said that he is eager to return home to put what he has learned over the past four years into practice. In keeping with his winning student research paper’s topic he has high hopes of entering the aquaculture field.

“I plan to return to my country to contribute to the further development of the Agriculture sector mainly through Aquaculture production. This I believe can significantly improve the socio-economic conditions of my country.”

When asked to give some words of advice to others who are pondering on furthering their education, especially those who are thinking that Taiwan is to far he said, “A university degree is a wonderful tool in this world, one that opens many doors of opportunity for anyone who is lucky enough to have one, distance should never be a hindrance.”

The Association of St. Kitts and Nevis Nationals in Taiwan would like to express congratulations to Mr. Lindbergh Belle and wish him the best in the future.