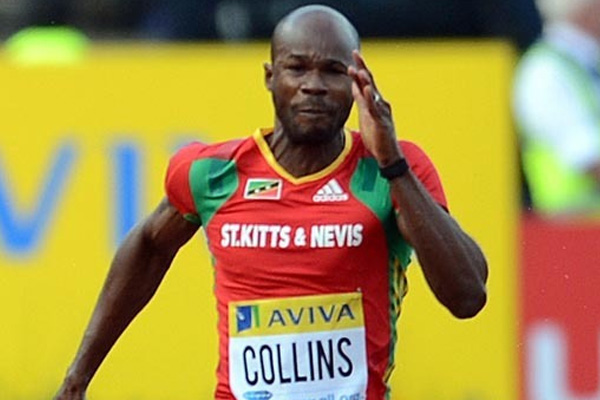 Another victory for Kim Collins. Favored to win World Indoor Championship Gold. But will he run?

Just one week out from the World Indoor Championships Caribbean Sprint Legend and St. Kitts-Nevis Hero Kim Collins continues his blistering Indoor season with a 6.52 secs victory in Germany just days after his personal best and SKN National Record Performance of  6.50 secs.

Collins blitzed the field to take a relatively comfortable victory. With GB’s Jason Dasalou out with injury Collins is favored to take gold at next week’s World Indoor Championships in Poland. That’s if he gets the green light from his Olympic Federation and Athletic Association. Collins recently expressed to the media that he has reached out to his Athletic Federation expressing his desire to represent his country at the World Indoors. Collins and his country’s athletic federation has been at Odds since the London Olympics debacle where Collins was sent home after an unauthorized over night stay with his wife and trainer Paula Collins at a London Hotel.

Public Relations Officer of the St. Kitts-Nevis Athletic Federation Mr. Evris Huggins has indicated that a committee has been put in place and talks are currently ongoing with Collins with a view to ensuring his participation at the World Championships. With Collins as one of the favourites his participation will possibly result in his country’s first World Indoor Championship Gold Medal. Collins has had much success ate the World Indoors with 2 silvers . However this year provides him with probably his best and final chance for a Gold Medal to go with his Commonwealth and World Championship Golds.

No Official Statement has been issued by the SKNAAA stating whether Collins desire to represent his country at the World Indoors will be granted.