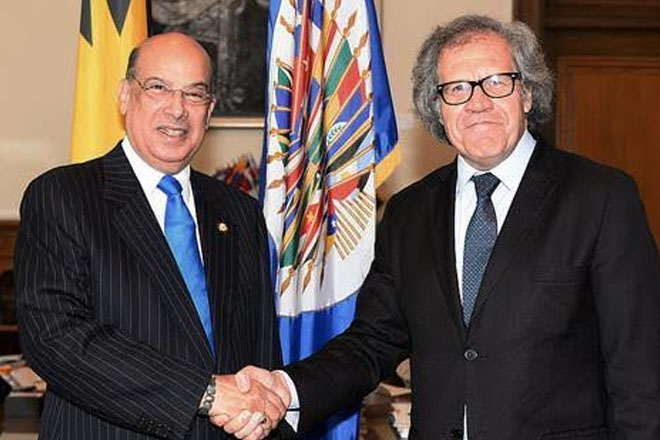 Antigua-Barbuda ambassador calls for strengthening of OAS to remain relevant

Washington, USA — Antigua and Barbuda’s newly appointed ambassador to the Organization of American States (OAS), Sir Ronald Sanders, told high ranking representatives of Western Hemisphere governments that they have to strengthen the Organization to make it relevant and meaningful.

Sanders made the remarks as he presented credentials to Secretary-General Luis Almargo Lemes at the OAS Headquarters in Washington on Monday.

At a ceremony attended by ambassadors of Canada, the United States, and Latin American and Caribbean states, Sanders declared: “There has never been a time in mankind’s history when our planet has been faced with common challenges of greater magnitude than now.”

He identified the challenges as climate change and threats to the existence of island states; terrorism both within and across borders; communicable diseases, drug trafficking and organised crime; and high unemployment among the young.

Saying that the OAS can contribute to the solution of these problems in collaboration and cooperation with other multilateral and international organisations, the Antigua and Barbuda diplomat called on the member states to “commit to strengthening the Organisation to play its fullest role in our Hemisphere and in the wider global community”.

Sanders added, “Notwithstanding that the UN Economic Commission for Latin America and the Caribbean has projected that for 2015 Antigua and Barbuda will have the highest growth rate of all Caribbean countries at 5.3%, my government welcomes the priority being given in the OAS to mitigation of natural disasters, facilitation of foreign investment and wealth distribution, and inter-connectivity in transport and information technology.”

In welcoming Sanders to the councils of the OAS, Lemes noted the vast experience of the Antigua and Barbuda diplomat in the international community. He said that he was confident that the Organisation will benefit from Sanders’ practical knowledge and known skills.