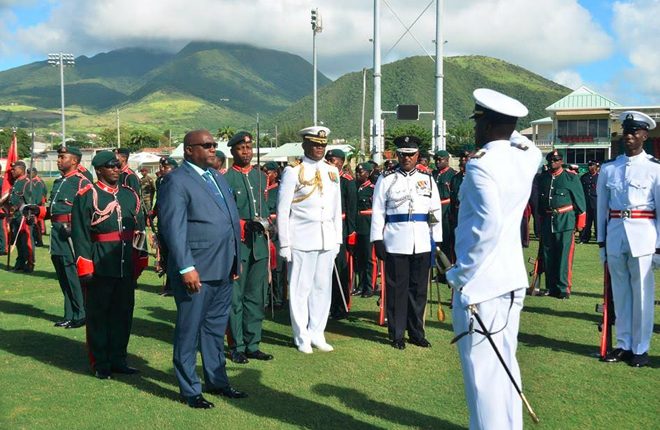 Apply to serve your country with honour in the security forces, says PM Harris

(SKNIS): Prime Minister of St. Kitts and Nevis, Dr. the Honourable Timothy Harris, has called on able-bodied residents to sign up to fill vacancies that exist within several national security agencies.

“We have over 100 jobs going a begging,” he told persons who attended or tuned in to the live radio and television broadcast of the third edition of the “Good Governance and Accountability for Prosperity” town hall meetings. The meeting was held on Tuesday, February 07, at the Newtown Community Center.

The Royal St. Christopher and Nevis Police Force, the St. Kitts-Nevis Defence Force, and the St. Kitts-Nevis Fire and Rescue Services were highlighted as the main agencies that need additional manpower. Dr. Harris, who is also the minister of national security, said working in the field is “a good start” for persons who are unemployed and wish to serve their country.

“When the young man, in the context of our security challenges, says that I will work in defense of law and order … what better calling could there be,” said the prime minister. “And that is why the government has been reaching out. That is why for the last three years, we gave the security forces their largest budget ever. That is why, this year, we have expended already $5 million to bring CCTV (closed circuit television) cameras all around Basseterre, and Shadwell, and Cayon and Charlestown because there must be peace in the land again.”

Last December, the Federal Parliament approved more than $71 million to fund the Ministry of National Security for the 2017 fiscal year. Just over $19.1 million was earmarked for Capital Projects, which include upgrades to several police stations across the federation and also the construction of a new Coast Guard Base at Bird Rock and a new prison at Estridge Estate. Additionally in 2015, government increased risk pay to members of the security forces, fire officers and prison officers by 20 percent.

Officials hope that the improved facilities, increase in remuneration, expansion of training opportunities and restructured promotional procedures will attract more men and women to consider a career in the security field.