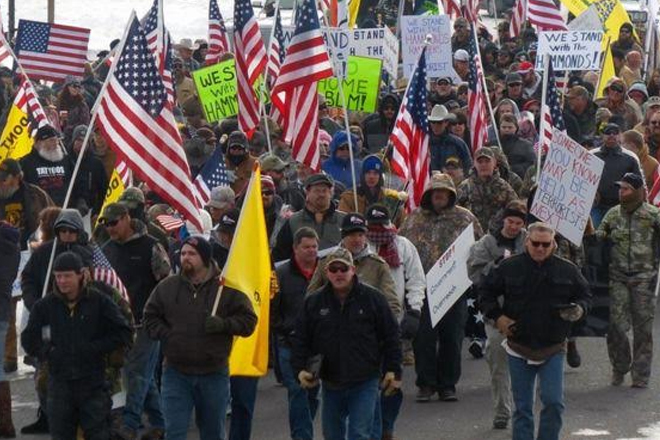 Armed protest at US government building

(BBC) Armed protesters have occupied a US government building in Oregon to support father and son ranchers who have been ordered to return to jail.

Dwight Hammond, 73, and his son Steven, 46, were convicted of arson in 2012 but a court ruled their original sentences were too short.

The Hammonds’ lawyer has said that the family does not want the protesters’ support, according to CBS News.

The case has riled right-wing activists who resent government interference.

They said they lit fires on federal land to combat invasive species and protect their land from wildfires.

Those occupying the Malheur National Wildlife Refuge centre in Burns say they plan to stay for years and may use violence if police try to evict them.

Local police said “outside militants” had seized the building, and that multiple agencies were working on a solution, the Oregonian reported.

Among those there is Ammon Bundy, whose father Cliven was involved in a stand-off with the government over grazing rights in 2014.

Speaking to CNN, Mr Ammon made no specific demands but said the action was aimed at helping locals “claim back their lands and resources”.

He said that the wildlife refuge had expanded at the expense of ranchers and miners.

The incident is part of a decades-old conflict between ranchers and the federal government over the use of public land.

Critics of the federal government say it often oversteps its authority over land use.

On Saturday an unknown number of men took over the bird sanctuary on a snowy desert plain in Oregon.

There is no sign of police officers and there has been no violence or negotiations. The militia men who seized the complex say they are prepared to stay for years.

They have urged supporters to take up arms and join them to assert the rights of ranchers in the American west; rights which they say have been trampled by a federal government over-reaching its authority.

The FBI said it was aware of the occupation and the sheriff has urged people to stay away from the building, saying multiple agencies were working on a solution.

In an interview with the Associated Press news agency, Ammon Bundy’s brother, Ryan Bundy, said the protesters’ ultimate goal was to turn the land over to local authorities so that people can use it free of federal oversight.

“I understand the land needs to be used wisely, but that’s what we as stewards need to do. A rancher is going to take care of his own ranch,” he added.

But despite the protest Dwight Hammond says he and his son plan to report peacefully to prison on Monday.

His lawyers told Associated Press “neither Ammon Bundy nor anyone within his group/organisation speak for the Hammond Family”.

Harney County Sheriff Dave Ward was critical of the protesters and their motives.

“These men came to Harney County claiming to be part of militia groups supporting local ranchers, when in reality these men had alternative motives to attempt to overthrow the county and federal government in hopes to spark a movement across the United States,” Mr Ward said in a statement.