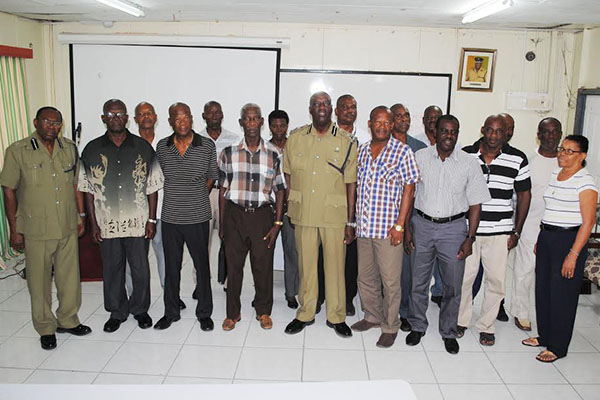 Basseterre, St. Kitts — After having served their country honourably for a combined period of several hundreds of years, retired officers of the Royal St. Christopher and Nevis Police Force have mooted the idea of forming a Retired Police Officers Association.

In a meeting held at the Police Training School in Newtown, Basseterre, on Friday April 25 Commissioner of Police Dr Celvin G. Walwyn gave them a firm commitment that he was in favour of such an association and pledged to give it support.

The meeting, which was attended by 15 retired officers with ranks ranging from Inspector to Commissioner, was called to order by Commandant of the Police Training School Superintendent Lionel Moore.

“This is a simple but significant meeting as we endeavour to form a Retired Police Association,” said Supt Moore. “As simple as we look here, even few in numbers we have put in hundreds of years of service to the Federation of St. Kitts and Nevis. Those years we put in should not, down the years, just go unnoticed. Even though some of us say it is late, I do believe that we must start somewhere.”

Commissioner Walwyn who informed them that he was a retired police officer from the State of Florida in the USA agreed with Supt Moore that those in that room had hundreds of years of experience, but could still assist if there was need for help in certain areas.

He gave the example of retired Assistant Commissioners of Police, Mr Joseph Liburd and Mr Joseph Richardson who have been assisting police officers studying. He thanked them for those services.

He recommended that all retired police officers should hold an ID card that shows that they have worked with the force as they will be accorded special privileges and advised those who did not have one to go to his office to get a letter, saying that holding the ID was their right as they would have served the Federation well.

While police officers in the USA observe a National Police Week in the month of May he recommended that they do something in St. Kitts and Nevis to honour police officers who have died in the line of duty even if it only meant attending a church service and holding a vigil outside the police station on Cayon Street.

“This meeting today is to see what we can do to move forward on how we can best benefit you as retired officers and how to help the young ones coming up to make this force that you gave your career, the force that you are still proud of,” said Commissioner Walwyn.

Commissioner Walwyn asked all in attendance to identify themselves as he did not know all of them, and the point of interest was when some of them stated the exact date they joined the force and the exact date they retired, some even calling down to the number of days that they served.

Retired Inspector Clarence H. Glasgow said that he served the country’s police force for 47 years and that he was happily retired. He however took offence when during some animated discussion it was claimed that his was a broken service. He stood his ground and insisted that he joined the police force, was transferred to the prison service and then back to the police force and therefore felt that his service was unbroken.

Commissioner of Police Mr Robert Jeffers, Retired, pointed out that from the list available he only saw the ranks of inspectors and above.  “What about those who retired below the rank of inspector?” he posed. “Retired means retired.”

Commissioner of Police Mr J. Calvin Fahie, Retired, said that he always took umbrage whenever he is not addressed properly as Commissioner Retired. “Only policing I know and we must be treated with respect,” he said. “I am happy that this group is about to take off, and I only hope that it will be supported.”