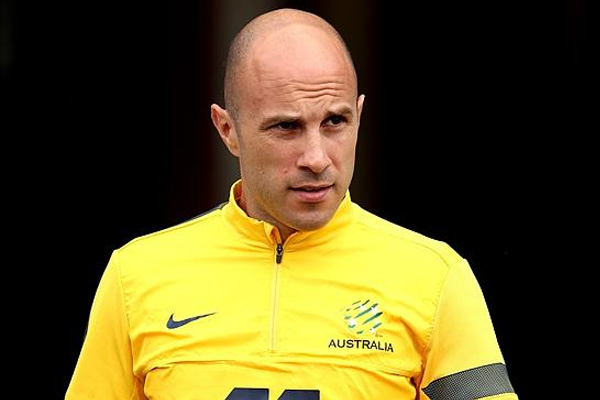 Aussies head for Brazil aiming for an upset

(FIFA WEBSITE)– Veteran Mark Bresciano said Australia plan to “shock the world” as they departed for Brazil to headlines asking: “Will Australia be the worst team at the World Cup?”

The inexperienced Australians, the lowest ranked team in the FIFA World Cup™ at 59, face a daunting task against Spain, the Netherlands and Chile in Group B.

Bresciano, the 34-year-old former Parma and Lazio midfielder, said he was excited about heading to his third World Cup and believed the team could hold its own. “It’s always a dream going to a World Cup, regardless if it’s your first or third,” he told reporters at Sydney airport where hundreds of fans saw off Ange Postecoglou and his squad.

“I guess the expectation is maybe a little bit high (this time) because, in the last nine or 10 years, we’ve been very successful as a nation. Saying that, we know that we are going to Brazil in a very tough group but we’re going to go there and just try and do our country proud and do ourselves proud and try and shock the world.”

His confidence is in stark contrast to the nation’s media which has largely written off their chances with The Age on Wednesday suggesting the Socceroos would be the worst team in Brazil. “The bookmakers regard Australia’s World Cup possibilities as something worse than a snowball’s survival chances in hell,” it said.

“As do the world rankings, which place Australia last of the World Cup qualifiers in 59th spot (between Mali and Burkina Faso). And judging by the social media response to the Socceroos’ stuttering 1-1 draw against a less-than-fearsome South Africa on Monday night, large numbers of the Australian public share that pessimistic view.”

The Australian said the team were leaving “with the sound of doom and gloom ringing in their ears” and bookmakers offering in excess of 750-1 for Australia to win the tournament. “One former captain (Paul Wade) believes they’ll be smashed, few fans hold out any hope they’ll get through the knockout stage and the critics believe they’ll be lucky to score a goal, let alone get a point,” the newspaper said.

The Socceroos will be one of the first teams to arrive in Brazil ahead of the showpiece tournament and Bresciano believes it will work in their favour.

“I think it’s worth getting there as early as possible – just to get the feel of the World Cup, get a feel of the atmosphere and get to know where we’re travelling … so you can focus on your training leading up to the friendly game and obviously the World Cup,” he said.

Australia’s squad of 27 will be reduced to 23 on 2 June, before they face Croatia in a warm-up on 6 June ahead of their World Cup opener against Chile on 13 June.