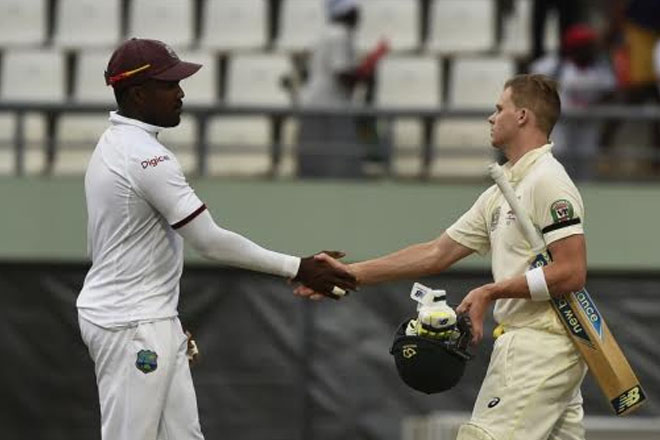 Kingston, Jamaica — Australia’s Steven Smith has become the second youngest batsman after Sachin Tendulkar of India to achieve the number-one ranking in the Reliance ICC Player Rankings for Test Batsmen after stellar batting displays in the Kingston Test, which Australia won by 277 runs to win the series 2-0.

Despite missing out on what would have been his first double century in his 28th Test, Smith has leapfrogged Kumar Sangakkara of Sri Lanka and South Africa duo of AB de Villiers and Hashim Amla following scores of 199 and 54 not out in the latest rankings, which were released on Monday morning.

However, according to a release from the ICC, Sangakkara will have a chance to reclaim his number-one ranking when he features in the series against Pakistan, which starts in Galle on Wednesday.

It has been a meteoric rise for Smith who, at 26 years old, is only a few months short of Tendulkar, who had topped the batting chart for the first time in 1999 at the age of 25 years old, the release added.

In achieving the landmark, Smith has also become the 23rd Australia batsman to date to top the batting table, with the last being captain Michael Clarke in January 2013. Steve Waugh spent 94 Tests as number-one – more than any other Australia batsman – while Don Bradman spent a record 6,320 days as the top-ranked batsman – more than anyone else in the history of the game.

Smith has gained 49 points from his efforts in Jamaica, which means he has also broken the 900-point barrier for the first time in his career.

He now sits on 913 points, which has given him 24th spot on the list of best Test ratings ever.