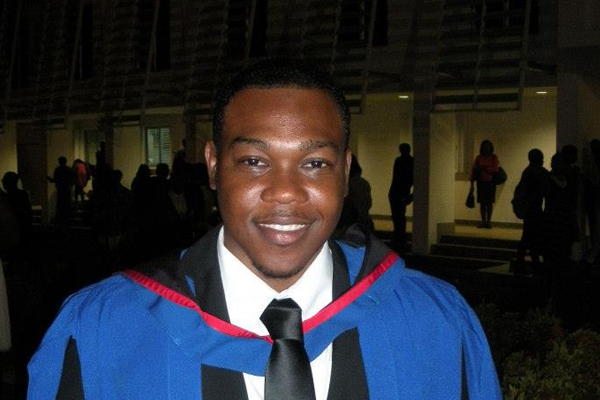 Azard Gumbs graduates with Bachelor of Laws degree with honours

(CUOPM) Another national of the Federation of St. Kitts and Nevis has graduated with a Bachelor of Laws Degree with honours from the University of the West Indies in Barbados.

Twenty-four-year old, Old Road-born, Mr. Azard Gumbs, son of Alison Douglas and Junie Gumbs, attended the Academy Primary School in 1994 and in 2001 was declared the Valedictorian of his graduating class.

Mr. Gumbs is presently pursuing the two-year Legal Education Certificate (LEC) at the Norman Manley Law School in Jamaica, where he is a first year student.

“I never initially saw myself doing law. In high school I did all the sciences – chemistry, physics and biology. At CAPE, I did Chemistry, Biology and Environmental Science and Applied Math Unit 1 along with Caribbean and Communication Studies. I excelled at the sciences with Grade 1 at CAPE in biology unit 2, chemistry unit 1, and both Units of Environmental Science, my other grade 1 came from Caribbean Studies,” said Mr. Gumbs in an exclusive interview with the Communications Unit in the Office of the Prime Minister (CUOPM).

Mr. Gumbs said he had initially started a degree in Biological Sciences at the UWI Mona Campus, Jamaica, in 2009, but within the first few months of the programme he realised that although he had always excelled at science, he did not have a passion for a career in science or even medicine.

“As such, I considered what area of study would truly suit me and I then made the switch to Law and started Cave Hill in 2010. I have no regrets to this day,” he added with words of appreciation.

“I wish to thank everyone who supported me along the way, Almighty God, my parents, family, friends, lecturers and well-wishers. Indeed, it is my belief that there is no foot too small to leave an imprint on the world,” said Mr. Gumbs.

In 2006, he became a student of the Clarence Fitzroy Bryant College (CFBC). At the end of his studies at CFBC in 2008, Mr. Gumbs was determined by CXC as the Runner Up State Scholar, having sat a total of 9 CAPE units within the two years, obtaining all passes with a total of 5 grade ones. Mr. Gumbs also graduated that same year as the top student in the General Arts and Science Division at the Clarence Fitzroy Bryant College.

In 2010, Mr. Gumbs left to pursue a Bachelor of Laws Degree at the University of the West Indies, Cave Hill Campus. Nevertheless, while at the Cave Hill Campus, due to his desire and love of service held many leadership roles.

During his first year, Mr. Gumbs served as the Year 1 Class Representative of the Law Society, where he represented the interest of his class.

In the 2011 – 2012 academic year, Mr. Gumbs served as President of the St. Kitts-Nevis Student Association and along with his executive, aided in strengthening the Kittitian/Nevisian identity on campus through a number of activities.

Mr. Gumbs also served as Vice- President of Programming and Volunteerism of the UWI STAT (Students Today Alumni Tomorrow) where he spearheaded a number of charitable activities, including but not limited to visits to the a local Children’s Home and evening walks where the group distribute food items to the homeless on the streets of Bridgetown, Barbados.

Mr. Gumbs also served as President of the UWI Cave Hill Law Society and Law Faculty Representative on the Guild of Students for the academic year 2012 – 13, where he further represented the views and interest of his peers within the Law Faculty through his attendance at Faculty Board Meetings, and his participation in various Faculty committees.

At home, Mr. Gumbs served as a Commonwealth Youth Ambassador, Deputy RYC and was inducted as a member of the St. Kitts National Youth Parliament Association at the age of 14 and served as Public Relations Officer (PRO) for the period 2008 to 2009. He also participated in Mock Parliament Debates as Leader of Opposition and Deputy Prime Minister.

He was also the host of the Television Youth programmes Talking Point and Youth Express and is a Liamuiga Youth Legacy Awardee for 2008.

The Office of the Prime Minister joins the parents, family members, friends and well-wishes in congratulating Mr. Gumbs on this well-deserved significant milestone.