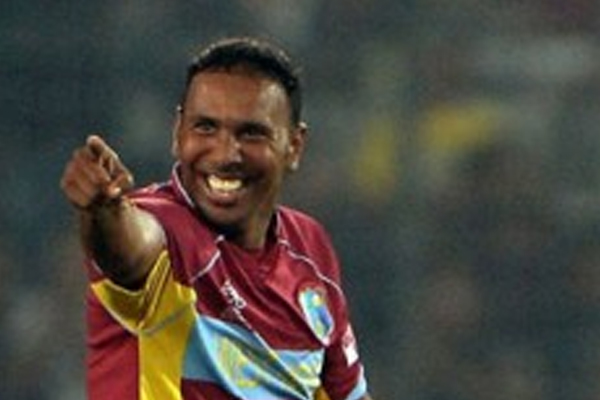 Dhaka, Bangladesh — West Indies eased concerns about their defence of the World Twenty20 title when they shrugged off their lethargy, to stroll to a convincing 73-run victory over Bangladesh here Tuesday.

Sent in, they tallied 171 for seven, with Man-of-the-Match opener Dwayne Smith blasting a top score of 72 from 43 balls while his partner Chris Gayle scored a strangely sedate run-a-ball 48.

The pair added 97 for the first wicket but once Smith departed, the Windies failed to find a meaningful innings, as no other batsman passed 18.

They were held back by a brilliant spell from young seamer Al-Amin Hossain who grabbed three for 21, with all three wickets coming in a superb last over that cost just four runs.

Leg-spinner Samuel Badree then picked up for four for 15 while left-arm seamer Krishmar Santokie claimed three for 17, to cripple Bangladesh and send them crashing for 98 with five balls remaining in the innings.

It was Santokie who delivered the fatal body blows early in the innings, however, striking twice in successive deliveries in the fourth over, to reduce the hosts to 16 for three – a position from which they never really recovered.

Only captain Mushfiqur Rahim with 22 passed 20 as Bangladesh fell victim to sharp work in the field from West Indies.

The victory moved the Caribbean side into second spot in Group 2 behind leaders India, with two matches still to play.

Following their weak showing in the loss to India in their opening match last Sunday, pressure was on the West Indies to respond and they did so strongly, to reignite their campaign.

While Gayle appeared out of sorts and struggled to get the ball away, Smith carried the Windies innings with an exhibition of clean hitting, mostly hefty leg-side blows as he counted ten fours and three sixes.

The first three overs went for just seven runs but Smith broke the shackles in the fourth over from off-spinner Sohag Gazi, with a pair of swept boundaries to get the Windies going.

Smith then swatted Al-Amin Hossain over mid-wicket for the first of his sixes in the seventh over, and Gayle followed suit in the next over from Sohag Gazi, depositing the bowler over long on to notch his first boundary.

Gazi suffered again in the tenth over this time at the hands of Smith, conceding boundaries from the first four deliveries as West Indies reached 74 without loss at the half-way stage of the innings.

Smith was beginning to raise the tempo of the scoring when he top-edged a slog at off-spinner Mahmudullah and was taken by Al-Amin Hossain at short fine leg.

Lendl Simmons was then bizarrely stumped down the leg-side off a wide first ball off left-arm spinner Shakib al Hasan but Gayle and Marlon Samuels (18) then held the innings together in a stand of 53 off 37 balls for the third wicket.

Neither were fluent and Gayle finally succumbed after striking three four and two sixes, brilliantly taken on the ropes by Tamim Iqbal at long off in the 19th over.

Darren Sammy (14 not out) collected boundaries of the next three deliveries – surviving chances off the first two – to ensure the penultimate over cost 16 runs.

However, the final over was bust for West Indies as they lost four wickets. Samuels slapped the first ball to Sohag Gazi at cover, Andre Russell holed out in the deep off the second delivery before Dwayne Bravo earned his second successive first-ball duck thanks to a stunning catch by Tamim at point off the fourth ball.

Sammy’s attempt to scramble three of the final delivery ended in Denesh Ramdin’s run out without scoring.

When Bangladesh batted, Badree shrugged off being hit for two fours in the first over of the innings to have the dangerous Tamim (5) taken low down at mid on by Bravo at 14 for one in the third over.

Ramdin’s brilliance in the next over accounted for Anamul Haque (10) stumped off Santokie and champion batsman Shakib lasted one ball, deceived by a superb slower ball that jagged away and rattled the stumps.

Though Bangladesh recovered to 51 for three, West Indies went for the jugular with Badree adding three more scalps, and the hosts lost their seven wickets for 47 runs.