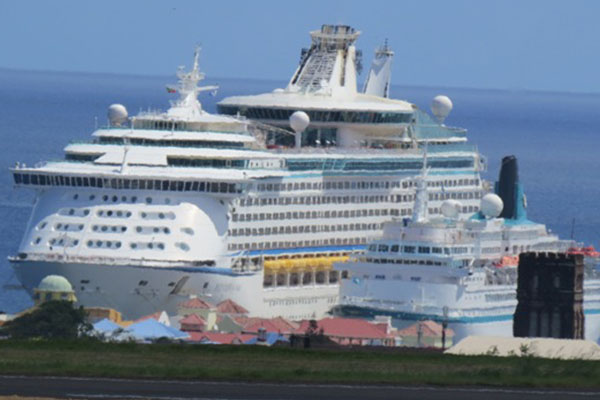 Baltimore Post-Examiner: “St. Kitts and Nevis is at the forefront of a cruise ship and hotel building boom”

Basseterre, St. Kitts (CUOPM) – A United States newspaper is reporting that St. Kitts and Nevis is at the forefront of a cruise ship and hotel building boom.

According to the Baltimore Post-Examiner, St. Kitts and Nevis is the smallest sovereign state in the Americas in both area and population, has 53,000 inhabitants and measures 104 square miles — less than twice the size of the District of Columbia.

“Yet it’s at the forefront of a cruise ship and hotel building boom that shows no sign of slowing down,” wrote Larry Luxner, a news editor of The Washington Diplomat and former editor of CubaNews.

“In early 2013, the government said it would spend $31 million to build a second cruise pier at Port Zante that’ll be able to accommodate two Oasis-class cruise vessels — the world’s largest passenger ships — one on either side. Construction is expected to be completed by November 2014, just in time for the 2014-15 cruise ship season,” wrote Luxner, who was born and raised in Miami and is based in Bethesda, Maryland since 1995.

Larry who has reported from every country in the Western Hemisphere quotes Jonathan Bass, CEO of the St. Christopher Air and Sea Ports Authority as saying that the signing of the MOU is indeed a timely response to the challenges faced with respect to berthing facilities.

“The unprecedented growth in the cruise tourism subsector that St. Kitts has experienced over the past six years has placed tremendous pressure on our berthing infrastructure — particularly on those days when more than three large vessels request berthing.”

Under the MOU, Massachusetts-based Jay Cashman Inc. will invest all the money necessary to build the pier. During the 30-year concession, SCASPA will continue to manage and operate the cruise facility.

“The cruise sector of the tourism industry has been going through tremendous growth over the last six years,” said Tourism Minister Ricky Skerritt, noting that the sector saw a jump from less than 200,000 visitors to more than 700,000 during that time.

“The improvements in downtown Basseterre, development of shops, restaurants and key attractions, and increasing the number of certified taxi and tour operators in anticipation of demand growth, have clearly had a very positive impact on the experience that St. Kitts offers to visitors,” he said.

In November, Prime Minister Denzil Douglas announced that St. Kitts will get its first high-rise buildings — in the form of the $70 million Prime Hotel and Condominium project to commence in May 2014.

Located in the hills of St. Kitts overlooking Basseterre National Park, the project will consist of a 70-room, eight-story major hotel and nine multi-floor buildings with 324 one-bedroom condos built into the hillside, with views of Basseterre. The principal investor is Gholam Abbas Fahim, who gained St. Kitts citizenship more than a year ago.

Prime Minister Douglas announced earlier this year two projects by Russian investors involving combined investment of $50 million. The first is the $37 million Ocean Grove project, which consists of 50 two-bedroom villas, and the second is the Windswept Residence Club of nine villas at a cost of $13 million. Ocean Grove is a joint venture between Christophe Harbour Development Co. and Canada’s Apex Capital Partners Corp.

Dwarfing all these projects is Paradise Haven on the island of Nevis. Asia Pacific Investment House recently raised $50 million toward the project’s total price tag of $250 million. The government says more than 1,000 local jobs will be created by Paradise Haven, a 500-acre golf and beach resort that will include villas, condos, retirement and family residences as well as a five-star hotel and a health and wellness spa.

However, tourism officials on Nevis say they’ll continue to market their 36-square-mile island as a small luxury cruise destination.

Mark Brantley, deputy premier of Nevis and minister of tourism, said at the Sea Trade Cruise Conference in Miami there would be no multimillion-dollar investments to expand existing cruise facilities on his island, which is home to 12,000 people.

“We do not have any intentions to build any cruise facilities in Nevis,” he said. “We feel that our focus is still predominantly land-based tourism, but where we can access either day-trippers from St. Kitts or alternatively we can access the small high-end cruises. That is certainly the way we wish to go.”