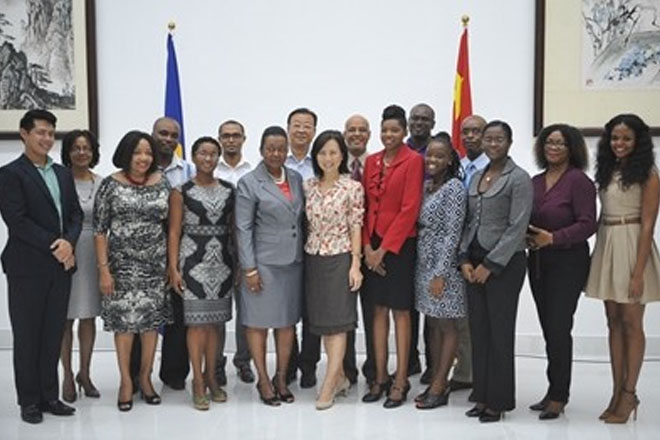 Permanent secretary in the ministry of tourism and international transport, Donna Cadogan, gave this indication recently, during a meeting at the Chinese embassy with several tourism officials who left the island for China over the weekend.

They will attend a Bilateral Tourism Seminar that will be held from October 13th to November 2nd.

According to Cadogan, “China presents itself as a significant source market, as current trends point to its increasingly dynamic participation in world travel and tourism. Chinese travellers are travelling individually and are also showing a preference for more non-traditional destinations.”

“The growth of the Chinese middle class has presented greater disposable income to a segment of the population with a higher propensity for foreign travel. Last year, the Economist Magazine reported that nearly one in ten international tourists was Chinese, and that China is the largest spender in international tourism globally,” she pointed out.

Cadogan added that this country had made steps to facilitate more Chinese visitors through the signing of a visa abolition agreement for holders of diplomatic and official passports with China in May 2014. She added that both countries had exchanged model air services agreements and that work was proceeding on the conclusion of negotiations for the agreements.

“We are cognisant of the fact that airlift between our two countries has presented a challenge as there are no direct flights; visitors usually have to travel through Germany, the United Kingdom or the USA. In this regard, work is proceeding on the conclusion of negotiations on an air services agreement with china, having already exchanged model air services agreements,” she stated.

Chief tourism development officer in the ministry, Nicole Alleyne, agreed that Barbados stood to benefit from marketing itself in China.

Alleyne, who is also delegation leader for the trip, added the objectives of the visit included learning about China as a source destination for visitors to Barbados, as well as a destination for Barbadians to visit; sharing information about Barbados and its tourism industry; creating additional strategic business partnerships for the mutual benefit of both countries; and discussing tourism opportunities that exist in Barbados and China.

The latter will include matters related to airlift, foreign direct investment; product development and technical cooperation.