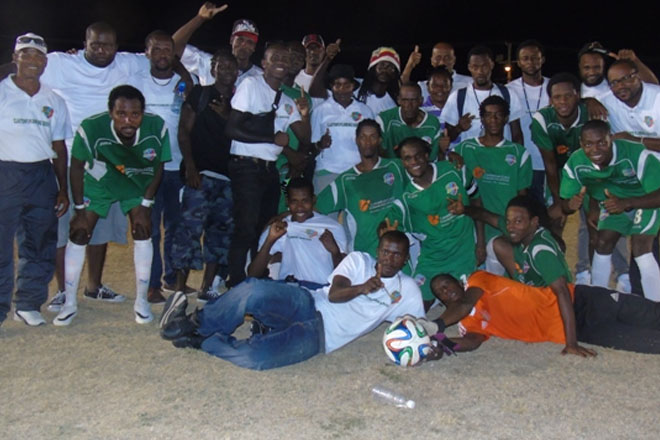 Sports Page — The CCC Bath United Football league has been elevated to the Premier league of the St.Kitts and Nevis Football Association competitions.

So far this year, the team has acquitted itself marvelously in the division one championships and the match scheduled for the ET Willet Park on Saturday 9th May, was a decisive one for the team.

The Bath men engaged the St.Kitts team known as Rivers of Living Water. A fair sized crowd showed up to witness the encounter.

The fans went virtually wild when the home team struck the back of the net in only the 5th minute of the game, compliments of the golden boot of Jeangardy Pettitfere.

After that, the visiting team was forced into defensive mould.

In the 47th minute Shaeed Tyson completed a run through to make it 2 goals to nil.

Rivers of Living water then pleased their fans by tapping one in, in the 67th minute off the boot of Joshua Liburd but the speedy Jeangardy Pettitfere, never to be kept out of the game, responded with his second goal in the 71st minute.

Rivers of Living water, completely bungled another chance as the minutes wore out. A completely open goal, with goalkeeper PAS left flat footed, and the striker tapped the ball wide of the upright!

Manager and Coach of the Bath team, Alex Claxton, were understandably elated after the encounter.

‘That is what we have been working hard towards. It’s a nice feeling to know that we have qualified for the premier league,’ he said.

He noted that there was one more preliminary round match in the Division one play offs which his team intends to win and the next move would be the finals and the grand trophy for his team.

Game two also played at the ETW, was even more exciting and it appeared as if several boat loads of Kittitians arrived just for game two.

The crowd was large and lively as Rams Village superstars came up against Hobson Garden Enterprises Garden Hotspurs.

Scoring for Rams Village superstars were Joseph Wilkes in the 39th minute and Austin Henry in the 78th.

For the Hobson Enterprises Garden Hotspurs, the goal scorer was Tiran Hanley in the 11th minute—a penalty.

There was one unsavoury moment when Tahir Hanley of the Spurs team was issued a red card by referee Kimbell Ward in the 82nd minute and in response he removed his shirt and kicked the ball out of the Park.