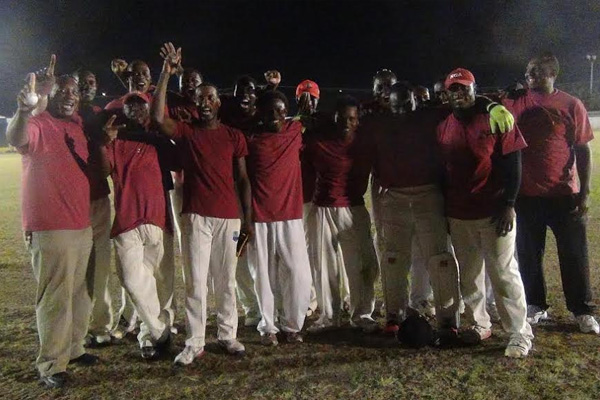 Sports Page — Set 161 for victory by the Bath Hotel Blazers, the Saddle Hill Rangers were off to a shaky start when the pace of Nelson Boland had them rocked back at 6 runs for 2 wickets. The ‘big fish,’ Carlon Smithen had been comprehensively bowled and Xavier Cornelius was caught at extra cover, attempting a lame hook shot.

It was the grand finals of the inaugural Nevis Premier league at the ET Willet Park on Sunday 1st June.

It looked to be all over by the shouting but two of Nevis’ young stars teamed up in an enterprising partnership as Ross Powell, chipped down the track and effortlessly struck Justin Athanaze for a maximum over the straight boundary.

He followed this up in the next over, with two superlatives off drives from the bowling of Tonito Willet and his compatriot, Philo Wallace also played some superb shots. Their running between the creases was also a worry to the Blazers and at one point seemed to be playing the old fashioned game of ‘every lash-one.’

That however proved their downfall, as Wallace called Powell through for an obviously suicidal single and Powell ultimately sacrificed his wicket.

Soon after, Wallace waltzed down the track to be superbly stumped by wicketkeeper Kejel Tyson.

Some brave shots by two other promising youngsters, Jamie Cornelius and Jevani Tyson brought them close to the target but inevitably they fell some 10 runs short and the sizeable crowd had received a real treat, worthy of a grand finals.

Kezron Archibald; Philo Wallace; Jevani Tyson; Wasim Mintos and Jason Campbell all got one wicket each

Nelson Boland 2 for 15; Theron Bussue 2 for 26; Tonito Willet and Oshane Williams 1 wicket each

In the presentation ceremony chaired by Carl Tuckett which was held immediately after the match, Stascius Wallace made the following presentations: