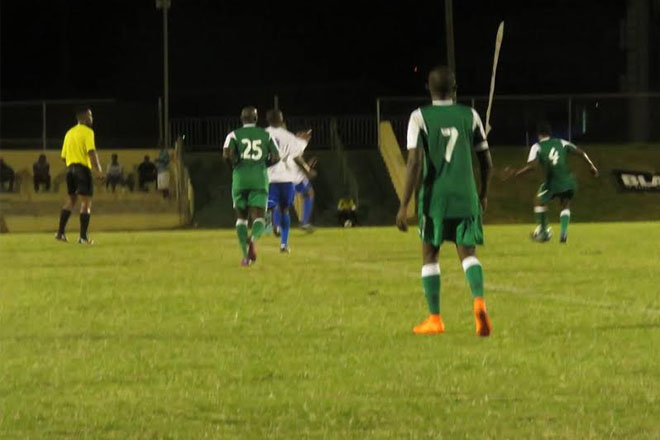 (ZIZ News) – The St. Kitts and Nevis Football Association’s Premier League continued over the weekend with a previously win-less team picking up its first set of points and another team continuing its undefeated run.

The first match of the weekend saw Bath United picking up its first win of the season against the still win-less Rivers of Living Water team.

The Nevis-based team recorded a 6-3 victory over Rivers, with goals coming from Dayle Farrell in the 8th and 28th minutes, Delvon Clarke in the 15th and Jean Gardy Petitfrere in the 63rd minute. Ajay Newton scored twice, in the 75th and the 1st minute of added time.

All three goals for Rivers of Living Water came in the second half from Joshua Liburd, Yannick Roberts and Jadarnie Browne.

For Newtown, Carlos Bertie scored in the 3rd minute, Marlo Martin in the 58th minute and Yohannes Mitchum in the 79th minute.

Leroy Hanley of Village Superstars scored an own goal in the 21st minute while the only score for his team came from Joseph Wilkes in the 76th minute.

Glenroy Samuel who scored in the 25th minute, struck first for Conaree, with Errol O’loughlin adding the second in the 72nd minute before Wazim Howe scored the team’s third goal in the 84th minute.

Kadeem Lewis of SOL Island Auto Conaree scored an own goal in the 38th minute.

Javiem Blanchette was the bright spot for Cayon by scoring twice…in the 2nd and 41st minutes. His teammate Jayan Duncan added the third goal in the 69th minute.

Keithroy Freeman led the fight-back for St. Paul’s with his two goals coming in the 30th and 73rd minute, with Terrence Ward scoring in the 66th minute.