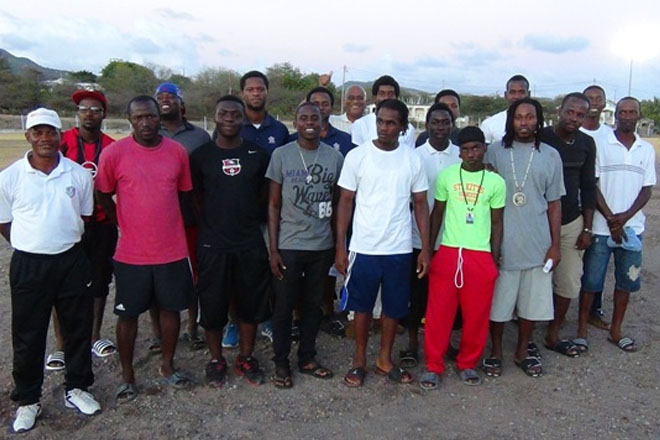 Sports Page — The Bath United team completed a successful division one season for 2015, in grand style on Saturday 23rd May.

In the final game of the season versus a determined Rivers of Living Waters team, the Nevis based team won in convincing fashion to seal the deal with a 5 to nil victory.

What is even more amazing, at the half time marker, the score line was nil-all.

NTV 8 sports caught up with the champion team in meeting mode at the Bath Village Playing filed on Wednesday night and spoke with Manager Alex Claxton.

Claxton noted that the first half was competitive but for the second half the team was very determined to finish in grand style…and that they did.

‘I think this is something we were looking forward to,’ he said.

He noted that the meeting on that afternoon was all about starting the preparations for the Premier league next year.

“We are not waiting for the season to commence, to start our preparations. The preparations begin now,’ he stated.

He indicated that the meeting which was also addressed by National Trainer, Masefield Nisbett, was all about planning pre season activities; conditioning; nutrition and diet and hitting the gym etc.

He also stated that the team is in the process of seeking sponsors for what is expected to be a hectic premier division league next year and committed to making the local Bath Village people and Nevisians on a whole, really proud.

The team members for their part, appeared really excited about the prospects and indicated that they will be stepping up to their A game.