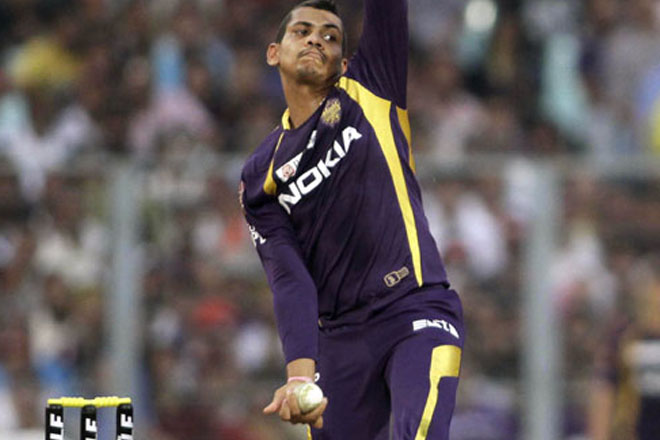 Sports Page — Sunil Narine has been banned from bowling his off breaks in any match organized by the BCCI, including in the IPL. He may, however, continue to bowl his other deliveries – the knuckle ball and the quicker straight ball. If he uses the off break again in the ongoing IPL, he will be suspended from bowling in BCCI-organized matches.

Narine had been reported again for a suspect action following Kolkata Knight Riders’ game against Sunrisers Hyderabad on April 22 in Visakhapatnam. He then went to the ICC-accredited Sri Ramachandra Arthroscopy and Sports Sciences Centre in Chennai for a biomechanical analysis of his bowling action. The BCCI suspect bowling action committee‎ reviewed the evidence of the match footage and the analysis, and concluded that Narine’s action for his off break was illegal.

Since being reported, Narine missed Knight Riders’ match against Chennai Super Kings on Tuesday as the franchise had decided to not risk playing the offspinner.

Narine had been reported twice during the Champions League T20 last year and was subsequently banned from bowling in the final of the tournament. He skipped West Indies’ tour of India and later withdrew from their World Cup squad, choosing to focus on remodeling his action.

He underwent testing at the University of Loughborough and was cleared but the BCCI asked him to undergo another round of tests at the Sri Ramachandra University. He was then cleared by the BCCI suspect action committee and played five games for Knight Riders this season before being reported again.

He will now have to undergo corrective work on his action again after which he can request for another assessment by the BCCI committee.