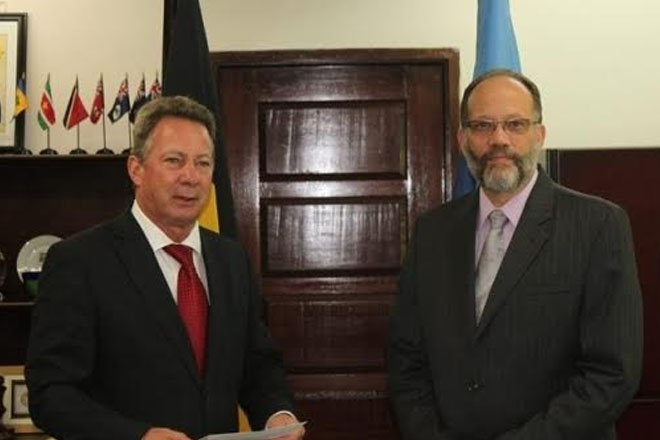 Belgian ambassador to Caricom says ‘no plan b for climate change’

Georgetown, Guyana — Climate change and sustainable development “are vital issues for the planet” according to Belgian Ambassador Guy Sevrin.

“There is no plan B for climate change,” the ambassador said in his remarks as he presented his credentials as his country’s ambassador to the Caribbean Community (CARICOM) in Turkeyen, Guyana yesterday.

According to a release from the Caricom Secretariat, Sevrin said that all countries must work together to save the planet from disaster.

Caricom Secretary-General Irwin LaRocque said the time had come for a binding Agreement on Climate Change and looked forward to such an agreement being forged in Paris this December at the 21st Conference of the Parties on the United Nations Framework Convention on Climate Change (UNFCC) known as COP 21.

LaRocque cited the unusual climatic events in the Region in recent times which had devastated Dominica last August and wreaked havoc in St Lucia and St Vincent and the Grenadines in December 2013 as vivid demonstrations of the effects of the phenomenon.

Against the backdrop of the effects of Hurricane Joaquin last weekend in The Bahamas, the Secretary-General said the Community needed strong voices of support in Paris. “For us it is a matter of survival,” he added.