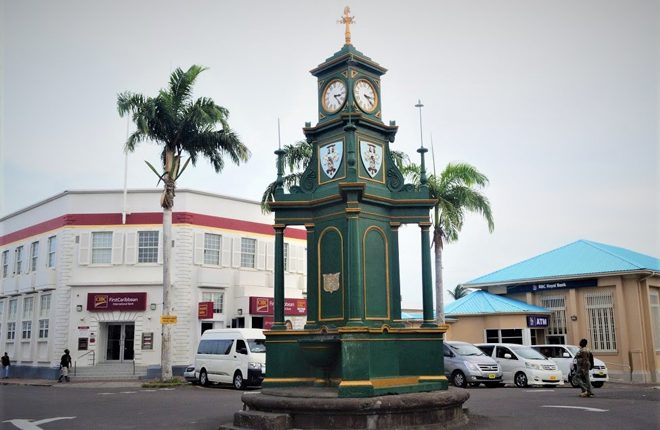 Berkeley Memorial Clock at the Circus in Basseterre Ticks Again

Basseterre, St. Kitts, October 04, 2018 (SKNIS): After many years out of commission, the Berkeley Memorial Clock, a national landmark and tourist attraction in the heart of the capital Basseterre, is ticking again.

The clock was repaired by Americans, JB Layman, a mechanical engineer, and his wife, Tannis Layman.

Acting Director of the Urban Development Unit, Mr. Rhon Boddie, said that there have been numerous attempts to fix the clock.

“The mechanism within it is over one hundred years old,” he said. “We were even looking to maybe modernize the mechanism, but with the input of Mr. JB Layman, who is a mechanical engineer, we had a look at it and basically figured out how we can get it working without changing anything. We readjusted certain things and he himself constructed some of the parts to get it going.”

Mr. Boddie noted that there were a number of trial and error attempts in the restoration process.

“When we started it first, we were losing about three minutes a day. So they tweaked and made the adjustments. It has been going well so far,” he said,

The acting director said that the repair was also possible with the help of Mr. Layman’s wife, Tannis who conducted research on the parts for the 100 year-old clock.

“He did the handwork and she did the research on it to assist in getting it working. Both of them were equally involved,” said Mr. Boddie.

“We always thought the clock should be working. It is important for citizens and residents to see the clock working constantly and consistently,” he said.

Mr. Boddie said that it is hoped that the clock will continue functioning for a long time.

“The memorial clock has been there since the 1800’s. It has been working and not working. We have had some periods where we have gotten it fixed and then it stopped,” he explained. “I’m not saying that it can’t stop again, but I think the way we went about it this time it might be working for a much longer period than it has been in the past because of the mechanical engineering that went into getting it working this time around.”

The Berkeley Memorial stands in the centre of the Circus in Basseterre, Saint Kitts and Nevis. The memorial features a drinking fountain as well as a clock. There are four clock faces, each one facing one of the four streets leading to the Circus. It was built in honour of Thomas B.H. Berkeley, a former president of the General Legislative Council in the 1880s.