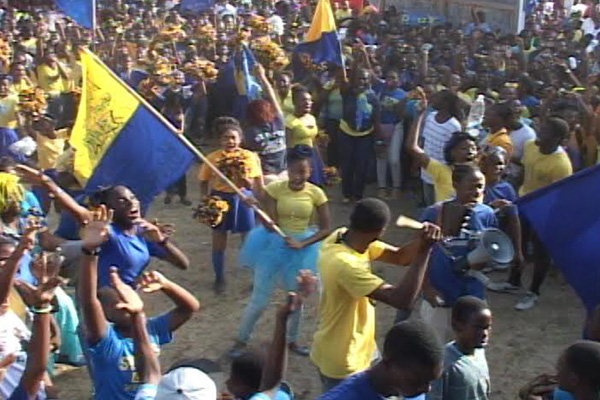 ZIZ News — The Basseterre High School is the winner of the first ever “I Rep My School Rally” held on Friday.

It was a spectacular sight of friendly competition and talent as hundreds of students participated in the first ever “I Rep My School Rally”.

The event, which kicked off with a march through the streets of Basseterre, was hosted by the TDC Group Of Companies and the St Kitts-Nevis Amateur Athletic Association (SKNAAA) for the athletes participating in this year’s TDC Interschool Track And Field Championships.

It was also used to present to the public the competing institutions using cheers, chants, dance moves and upbeat music in between demonstrations in an effort to promote the games and its sponsors.

Additionally, it also served to foster the true spirit of sportsmanship, camaraderie, and friendly rivalry against the backdrop of athletics at the national level.

In the end, the second place finisher at last year’s Interschool Championships, The Basseterre High School, claimed victory with a total of 16.5 points.

The TDC Interschool Track And Field Championships will be from Friday March 28 to Sunday March 30 at the Silver Jubilee Stadium.

The Washington Archibald High School is the defending champion after winning the competition three years in a row.