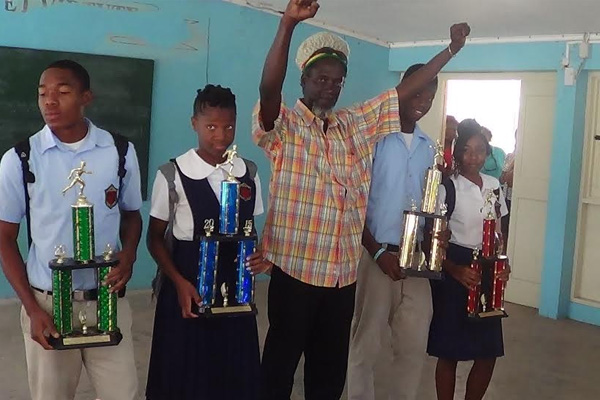 Blackman gives back to CSS

(Sports Page)— There were loud and spontaneous cheers at the Charlestown Secondary school on Friday 6th March.

The students were in an upbeat mood as Headmaster, Mr. Edson Elliot made the announcement that the popular drinks maker and seller, Teddy BLACKMAN Liburd, was about to make a presentation to the school.

BLACKMAN, when given an opportunity to say a few words , thanked the students for their kind patronage of his mobile van which features in selling locally made drinks which include such favourites as: Banana/oats; breadfruit/banana/oats; passion/gooseberry; gooseberry; breadfruit; lemonade; watermelon; cucumber and much more, which he is adamant lends to body endurance and increased brain power.

He noted that in light of the patronage received from the school on a daily basis, he felt that it was imperative that he gave back something to the school.

BLACKMAN then presented four trophies to the four most outstanding athletes from the school’s recently held annual sports day:

The following persons received the trophies:

The school used the opportunity to present other trophies and medals to the other top athletes from the various houses as well.