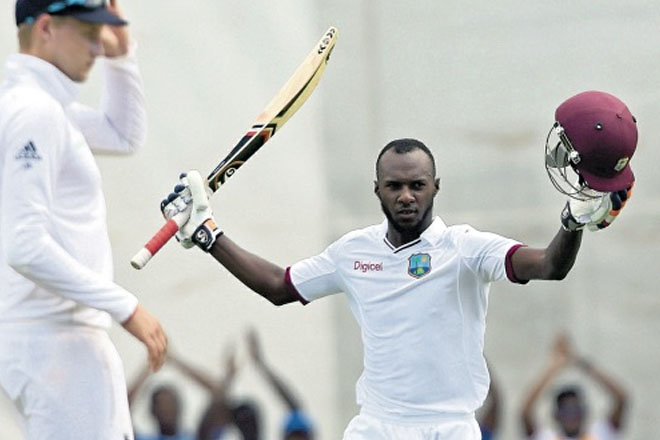 North Sound, Antigua and Barbuda (AFP) — England’s top-order tumbled cheaply again, but the tourists still worked themselves into a commanding position at 116 for three in their second innings, an overall lead of 220, by stumps on the third day of the first Test against the West Indies at the Sir Vivian Richards Stadium in Antigua yesterday. Jermaine Blackwood’s maiden Test hundred lifted the home side to 295 in their first innings with James Tredwell’s off-spin bringing him the excellent figures of four for 47 off 26 overs and ensuring his side earned a significant first-innings lead.

Left with the final session to build on an advantage of 104 runs, openers Jonathan Trott and captain Alastair Cook were prised out in double-quick time by Jerome Taylor. First-innings centenarian Ian Bell was then run out, but at 52 for three, Joe Root (32 not out) joined Gary Ballance (44 not out) in resisting the early threat and then profited against bowlers who quickly ran out of discipline and inspiration.

Defending a first-innings total of 399, English perseverance in the field on another sweltering day’s play eventually paid off. Tredwell made the important breakthrough in the morning by removing Shivnarine Chanderpaul for 46 before adding the wickets of Jason Holder and Kemar Roach as the West Indies lower order failed to show any meaningful resistance, the last four wickets subsiding for 19 runs. Blackwood’s unbeaten 112 was compiled in a stay of almost six hours at the crease, highly unusual for a batsman noted for quick-fire, strokefilled innings. His knock was not without moments of good fortune though.

Reprieved when he offered a slip catch off a no-ball delivered by Ben Stokes on the second evening, the 23- year-old Jamaican benefited from another let-off half-an-hour into the day’s play when, on 43, Tredwell failed on hold to a difficult chance diving to his left at gully.

Stokes was the suffering bowler yet again, and his disappointment intensified when the same batsman survived a confident lbw appeal and subsequent referral to the television umpire before edging a boundary between the two slip fielders early in the afternoon session. Blackwood eventually reached the treasured landmark with a single off Tredwell, completing his hundred in 296 minutes off 205 deliveries, with 13 fours and two sixes. “It’s a very big difference,” Blackwood observed at the end of the day in commenting on the significance of getting to a Test hundred after three previous halfcenturies.

“Nobody remembers fifties. It’s hundreds that matter. And I’m so proud and happy to get the first of what I hope will be many, many more.” His fifth-wicket partnership with Chanderpaul had prospered to the tune of 93 runs when the obdurate left-hander departed, falling into a well-set trap when a mistimed drive at Tredwell found, ironically, Stokes in one of two short catching positions on the off-side.

The senior batsman’s dismissal brought an immediate sense of vulnerability to the rest of the West Indies batting line-up and that potential fragility was magnified when new batsman Denesh Ramdin gloved a lifting leg-side delivery from Stuart Broad to depart for just nine, and give wicketkeeper Jos Buttler his fourth catch of the innings. However, Holder, dropped at shortleg by Ballance off his second delivery from Broad, contributed 16 in a 49- run stand for the seventh wicket until a loose drive, just after Blackwood had reached his hundred, gave Ballance the opportunity to make up for the earlier miss at extra-cover.

James Anderson wrapped up the innings by dismissing last man Sulieman Benn, lifting his tally of Test wickets to 382, just one short of the English record held by former allrounder Ian Botham.