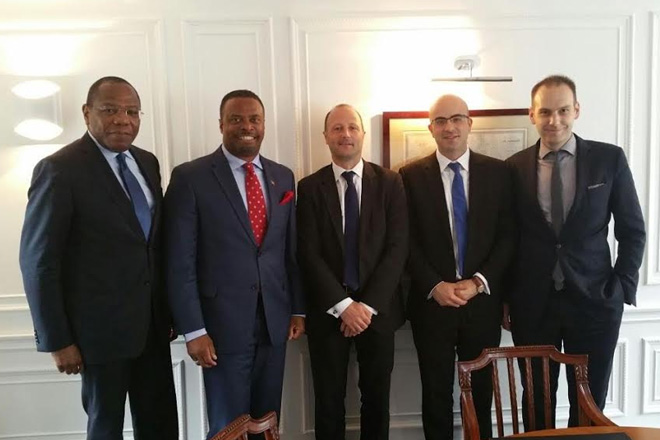 Basseterre, St. Kitts (SKNIS) — St. Kitts and Nevis’ Foreign Minister, Honourable Mark Brantley, continue to shore up diplomatic support for the ongoing development of the federation, as he recently participated in a series of meetings in London, England.

“As the new Foreign Minister, I thought it was important to engage the High Commission on the intentions of the Government of St. Kitts and Nevis,” Minister Brantley said. “It was important also to discuss and rationalize our expectations towards building greater partnerships and relationships that will benefit the citizens of the federation.”

Efforts were made to revitalize the diplomatic relationship between the two countries and to leverage strategic collaborations with the UK government, multilateral agencies and the thriving local business community.

Minister Brantley welcomed and thanked the respective partners for their interest in St. Kitts and Nevis and assured them that his government is eager to engage them further in moving the federation forward. The government he stressed “is ready to transform St. Kitts and Nevis in a way that ensures the country’s prosperity, promote respect for all citizens and bring about growth with dignity and integrity.”

The Foreign Minister left London for a two-day working visit in Florence, Italy, on Tuesday July 14. While there, he is expected to meet with members of the Tuscan region business community and local officials.

This working visit is part of the government’s vision and the Foreign Minister’s remit to expand the federation’s diplomatic footprint.

“I feel strongly that on a rapid changing global landscape, it will be increasingly important for any foreign ministry to play a greater role in reaching out and building the right types of relationships, partnerships and networks in order to help realize greater benefits for its people in a variety of areas,” he concluded.