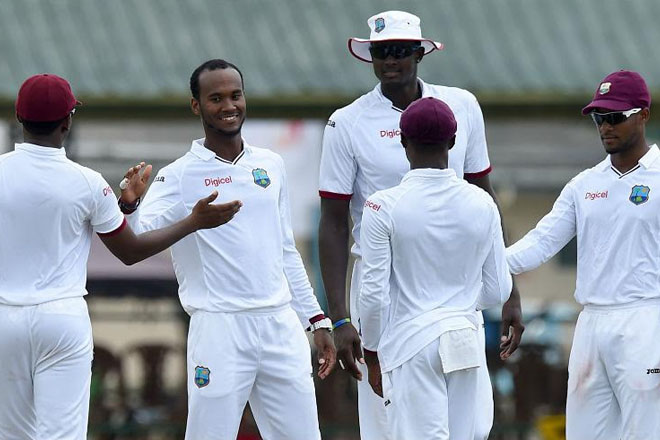 (ZIZ Sports) – He kept in skipper Jason Holder’s ear all the time, telling him he can get the breakthrough, well he got more than that and ended with half a dozen wickets to give the West Indies a chance of squaring the Sobers/Tissera Test series at the end of a rain shortened third day of the the second and final match at the P Sara Oval in Colombo.

The Barbadian grabbed 6/29 to humble Sri Lanka for 206 all out and in the process setting up a victory target of 244 runs for his team to chase. However, his day did not end on a perfect note as he perished leg before wicket to Dhamika Prasad just before rain came down at 2.30pm to wash out the remainder of the day’s play, with the West Indies 20/1.

Brathwaite said at the end of play that when the fifth wicket partnership was ongoing he told Holder to give him a bowl as he would get the wicket for him.

“I just got a feeling that I would get a breakthrough, so I kept in Jason’s ear and and he finally gave me the ball and told me to just keep it tight. I was able to get wickets and keep us in the Test match.

“It is going to be difficult out there tomorrow but once our batting unit stay patient, I think that we will get the runs. There is assistance there for the spinners but the guys need to stay positive and patient and the runs will come.”

Despite rain hanging around play got underway on time and immediately the West Indies took to the Sri Lankans. Resuming on the bedtime position of 71/2 the home team quickly slipped to 84 for four.

Debutant Jomel Warrican produced the first cheer for the Caribbean men as he had the scalp of Kaushal Silver for 39. Soon after Jerome Taylor cut Dinesh Chandimal in half with a beautiful inswinger and Ramdin grabbed the nick to complete his second catch of the morning. Sri Lankan nerves were calmed after that by a fifth wicket partnership of 67 between the free flowing Malinda Siriwardana and skipper Angelo Mathews. Siriwadana played without caution and thrilled the handful of Sri Lankans at the ground, twice carrying the ball over the ropes.

Looking to manufacture a wicket from somewhere Holder pulled a masterstroke by throwing the ball into the hands of part-timer Brathwaite and the rest would prove to go down in history.

He cleaned men up with alarming ease, aided by some poor shots and brilliant catching by the Jamaican Jermaine Blackwood – who would end with five. Siriwardana was the first to fall to Brathwaite for a 60-ball 42 that included three fours and two sixes.

Getting less turn than every other spinner who plied their trade on this pitch, must have been the key to his success. Brathwaite maintained a line just on or about the off stump and this gave Blackwood at first slip plenty business.

His biggest scalp was Mathews who was intent on occupying the crease and looking to dig his team out of a hole. He was finally dismissed for 46, realised in 153 minute off 120 balls with three fours. Wicket after wicket, Brathwaite seemed to be more and more surprised and at the end his figures read six for 29. It was the second best by a West Indian against Sri Lanka after Corey Collymore’s 7/55. He was also the first Barbadian bowling off-spin to have taken five or more wickets in a Test match.

Due to the time loss due to the rain today, play will get underway at 9.45am on the fourth day.

A Mathews c Blackwood b Brathwaite*46

D Prasad not out*1