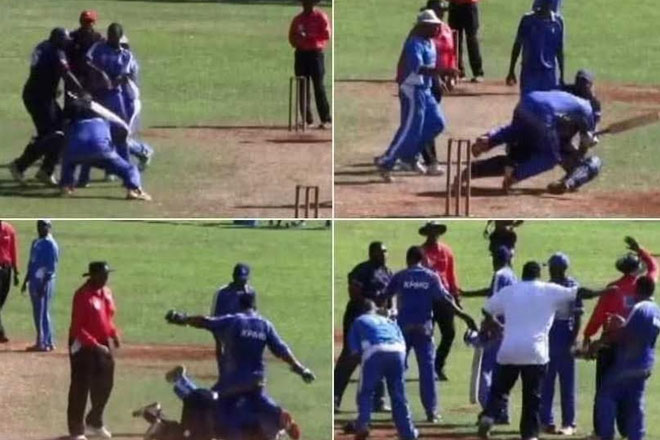 Sports Page — An on-field brawl between two Bermuda Club Cricketers during the country’s Champion of Champions final on September 12th has resulted in one of them being banned for life and the other slapped with a lengthy suspension by the Bermuda Cricket Board.

At the end of an over during the game, Cleveland County Cricket Club’s wicketkeeper Jason Anderson, while changing ends, smacked the Willow Cuts Cricket Club’s batsman George O’Brien on the head to spark off a massive fight. O’Brien swung his bat at Anderson, who – after a moment of calm – then rushed the batsman and pushed him to the ground. Anderson then appeared to aim at kick at O’Brien’s body too, and the pair had to be separated by a large number of players and officials as play was stopped.

Anderson was given “a life ban from all cricket, and any involvement in the game of cricket in Bermuda in any capacity” by the BCB, while O’Brien was suspended for a length of time that will include six 50-over matches at the start of the next season.

The Cleveland Club imposed more sanctions on Anderson, banning him from representing the club “in all sporting activities for life.” Cleveland coach Clay Smith wrote in his column for The Royal Gazette that the incident was a new low in Bermuda cricket. “Our standards of discipline have slipped tremendously, and what is deemed acceptable on the field of play is completely unacceptable,” Smith wrote. “Too few players are being written up for what some may deem minor infractions.

“There is a solution to this madness, it just requires the Bermuda Cricket Board to implement the code of conduct that players are expected to play under at the ICC international level.”

The incident was criticized in Bermuda’s parliament. “What was to be a family and community event, has instead been marred by a repugnant incident of violence, lawlessness and unsportsmanlike conduct,” Shadow Sports Minister Michael Weeks said.