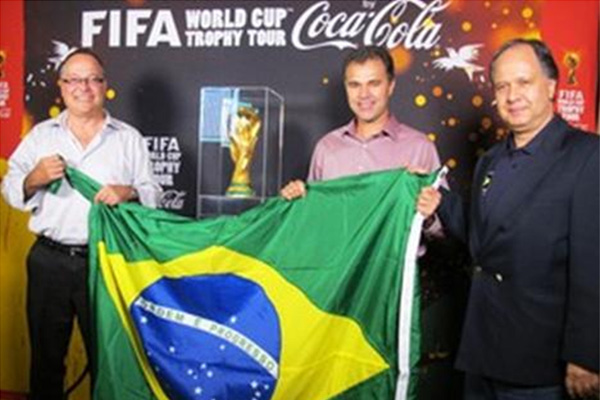 Brazilian coach divides time between soccer and working at the Embassy of Brazil in St. Kitts

Basseterre, St Kitts – Brazilian, Glemerson Martins combines his day job at the Brazilian Embassy in St. Kitts with volunteering as a coach at local soccer clubs just for the pleasure of experiencing the game.

Born in Goianesia and raised in Goiania – Goais, Martins played for professional soccer teams like Anapolina and Goias before the age of 20. After moving to the United States, he began playing soccer for American universities. More recently he has been working with colleges and private clubs as an assistant coach and then he became a head coach.

Mr. Martins has been living in St. Kitts for the past two years, after his American wife was accepted into a medical school in Nevis.

He needed employment and was invited to work for the Brazilian embassy in St. Kitts, which was established in 2010.

“I worked as a coach in the United States. When I went to Nevis, soccer barely existed there. We set up a team and we were champions, and then I was invited to come to St Kitts working with teams a bit stronger,” Martins said.

The soccer teams in St Kitts and Nevis do not train year round as they do in Brazil. Training begins only about a month before any major competition. For Martins, the lack of training time is a major factor hindering the development of professional skills needed to advance the country’s soccer teams.

“The players work hard during the day in construction, hotel chains, and local business and then go to the training field. It is just not enough training time,” he said.

But the shortcomings of soccer in the country are not only the training structure of the professional teams but also the lack of skill with the ball at their feet is a major concern of the coach. There are good players on the island, some even play in the American League.

“They have good physical conditioning, but some players struggle with the finish, a fundamental of goal-scoring; they do not know how to kick the ball into the goal! It is a problem that needs to be corrected. That’s why I try to spend more time with them, showing how important is to have a good finish. From my point of view, a team that does not score will never win a championship,” he joked.

Martins and three other embassy officials, including Ambassador Douglas de Vasconcellos, attended the FIFA World Cup Trophy Tour, a party reserved for officials and guests at a hotel in Basseterre, the capital of St Kitts, on Friday 18 and Saturday 19 October.

Blessed with the opportunity to see firsthand the most coveted object of the sport, he insisted on taking a picture with the cup while holding a Brazilian flag brought by Martins to the event.

“The goal is to make noise; creating an impact to all that we are Brazilians! I really wanted to lift the trophy, but it was not allowed,” Martins said.

His desire is not to return to Brazil to coach yet, but rather bring his expertise in soccer to places like St Kitts and Nevis and eventually take a team to a higher level like the FIFA World Cup or the U-23 for the Olympic Games in Rio de Janeiro in 2016.

A fan of Luis Felipe Scolari, the coach is confident in the Brazilian team for the world title in 2014.

“Our chance of winning the Cup is the greater since Scolari took over the national team because we were lost with Mano Menezes. With the team well organized nobody can beat us, and Scolari knows how to organize a team to win; he did it before and will do it again,” Martins predicted.