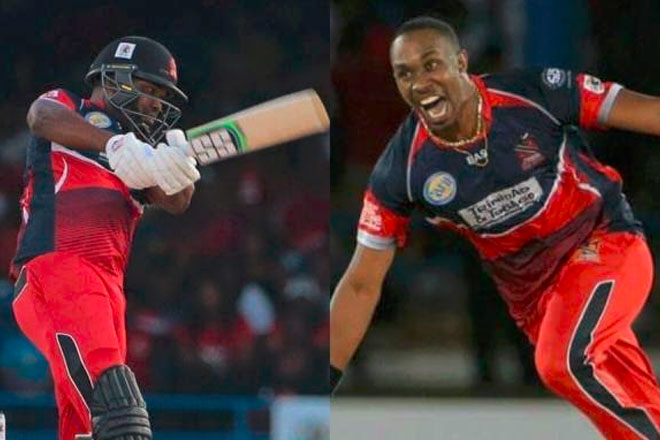 Sports Page — The pressure of knock-out run-chase proved too great for the Jamaica Tallawahs who were beaten by the Trinidad and Tobago Red Steel by 27 runs in a tense match at the Queen’s Park Oval.

The Red Steel will now play Guyana Amazon Warriors for a place in the 2015 Hero CPL Final against defending champions the Barbados Tridents.

The Tallawahs collapsed from 97-2 in pursuit of 152-6 to 125 all out with Red Steel captain Dwayne Bravo taking three wickets in the eighteenth over to finish with figures of 5-23.

The Tallawahs were provided with a strong start by Chris Gayle who struck a typically belligerent innings of 30 at the top of the order. He was supported well by Mahela Jaywardene, Chadwick Walton and Jermaine Blackwood who all made double-figure scores, but none of them kicked on and when Blackwood fell with the score 97-2 quite suddenly everything changed.

The runs dried up, the pressure built and when Andre Russell was dismissed in the 16th over he was the first of seven wickets to fall in 21 balls as the Tallawahs collapsed in a heap. Bravo will be the star for his five wickets but in reality all the Red Steel bowlers bowled well and deserve credit for keeping the pressure on in a tight and nervy run-chase.

The Red Steel had the other Bravo, Darren, to thank that they scored as many as they did. Bravo’s 63 ball 86 not out helped rescue the home team from the mire of 18-3 having won the toss to end up with 152-6. A score that ultimately pressured the Tallwahs into mistakes.

Bravo has a wonderful scoring range, capable of striking boundaries all around the wicket, and yet again he displayed that in a masterful innings that at first consolidated, then solidified and then attacked to move Red Steel through from weakness to strength in less than 15 overs.

Bravo hit six sixes and four fours and was only assisted by Jason Mohammad, who scored the only other double-figure score of the innings, returning 28. The Red Steel bowlers will take the headlines for their remarkable efforts at the death but this match was setup by Darren Bravo and he was rewarded with man of the match.