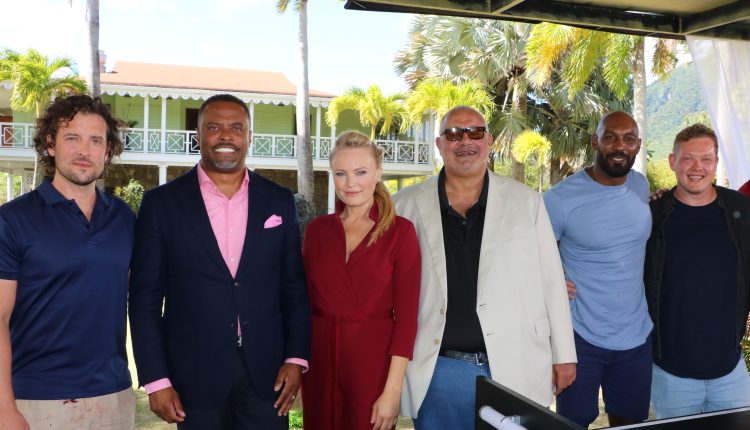 MSR Media began filming the psychological thriller “Us or Them” on March 14. Mr. Martinez invited the Premier to the set on location at the Botanical Gardens on March 23, where he met with the cast and crew.

Mr. Martinez said, “Mark it’s the fifth movie we’re doing here. Fourteen months ago we talked about making movies in Nevis; since then we have worked together and made five films happen, more to come. The vision is happening. I think it’s important, and what makes me very happy is that when I come on set I see so many Nevisians and people from St. Kitts as well that work in learning a new industry, and that’s because we had a vision fourteen months ago, so you know all of these people who are learning a job, I’m very proud of that because that’s what’s called creating an industry.”

Premier Brantley, responsible for Tourism, Economic Planning, Foreign Investments and the Film Industry, congratulated Mr. Martinez and his team for their role in the creation and development of the newest industry in Nevis’ economic tapestry.

“We all talked about the idea of making movies here but I really want to applaud Philippe Martinez and MSR Media because they made it happen. So all of us are here today celebrating the fifth film done here on the island of Nevis during the COVID era, because of him and his vision.

“It really says to me that Nevis is doing something really beautiful, really important that it is benefiting the island of Nevis and also the wider Federation of St. Kitts and Nevis. I confess that I really like thus far what I’ve seen and the way Nevis has been portrayed, so Philippe thank you very much; thank you for your friendship, thank you for your partnership,” he said.

Mr. Brantley welcomed the film’s stars Malin Akerman and Jack Donnelly back to Nevis, and also welcomed Wayne Gordon, who is visiting the island for the first time.

Akerman and Donnelly starred in MSR Media’s romantic comedy “A Week in Paradise”, recently released internationally on major streaming platforms. Akerman said she is delighted to be back working in Nevis making movies with MSR Media.

“Making movies in paradise is not a bad thing, and especially when the world was shut down and we got to come out here and enjoy your beautiful island. It’s hard not to fall in love with the people, the place, the beauty; and to think that there’s a future in movie-making in paradise. You’re going to attract every single movie star and we’re going to make big movies out here I think.”

Wayne Gordon shared his view on filming on the picturesque island.

“It’s a great pleasure. The island is beautiful. To wake up every morning and look across at that [idyllic surroundings], would I rather be here now or back in the UK where it’s raining and cold? Everyone has been superb…Hopefully, I might get a chance to come back.”

Tom Paton is directing the thriller. He said filming his first movie on Nevis in 2021, MSR Media’s “Assailant”, was an interesting experience and he is proud to have another chance to film on the island.

“With MSR setting up here it has allowed me as a filmmaker to get more creative. I specialize in genre movies- science fiction, horror, and thrillers- and to suddenly transplant them from traditionally these dark moody movies and to say ‘what happens when you tell that kind of story in this climate?’ I think you end up with something entirely unique and original and I couldn’t recommend shooting a movie here more if I tried to.

“I’ve actually fallen in love with Nevis; head over heels. I can see myself staying here for as long as you guys will let me.”

Having fulfilled its initial deal with the NIA early in 2021 to produce two films on Nevis, the company signed a three-year multi-film production deal with the government in May 2021.

MSR Media is expecting to wrap pre-production of film number five by the end of March and plans are already in the works for the sixth movie, a romantic comedy.
Continue Reading
Share
You might also like
National