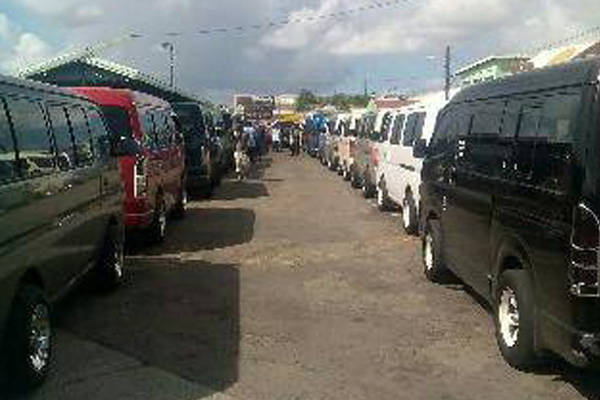 Basseterre, St. Kitts (CUOPM) — Several issues have been discussed between the Ministry of Housing, Public Works, Utilities and Energy and representatives of the East, West and St. Peter’s Bus Associations in an effort to address some pertinent issues related to public transportation.

According to the Ministry, over 1,000 LED lights have been purchased to improve lighting in several areas, the Public Transport Safety Board is to be reactivated, bus stops to be lighted and passengers are being asked to pay fares in smaller denominations.

When activated the Board is expected to carry out its mandate to make recommendations to the Minister with responsibility for public transport and passengers are being urged to pay their fare on entering passenger buses.

“The issue of security was also discussed and efforts are being made to address this issue. Bus operators desirous of installing security cameras on their buses will be afforded tax concessions by the Government. The security forces have also stepped up island wide patrol,” a news release from the Ministry said.

It said that the St Kitts Electricity Company Ltd (SKELEC) has conducted a survey on the lighting of bus stops and as such has began to put in place, measures to improve lighting at bus stops.

“Areas along the island main road without lighting will be lit. The Government has purchased some 1000 LED street lights and these lights are earmarked for these areas,” said the release.

It disclosed that a major concern raised by the Bus Operators is the size of the monies being used by the customers when paying bus fees.

“The Ministry seeks the cooperation of the general public on this matter. As a matter of safety, the Bus Operators are asking passengers to consider issues related to delays when dealing with large bills. The operators also require the assistance of the general public in making payment while entering the bus as this also minimizes delivery times and improves passenger’s safety as Bus Drivers are often performing the dual role of Bus Operator and Bus Conductor,” it said.

It added that the Ministry again seeks the assistance of the general public in this matter and urged commuters to pay as they enter.

The Ministry of Public Works has impressed on passengers and bus operators that public safety begins and ends with all of citizens.
“Please be vigilant and follow simple safety guidelines in order to make your travel pleasant and safe,” the release concluded.