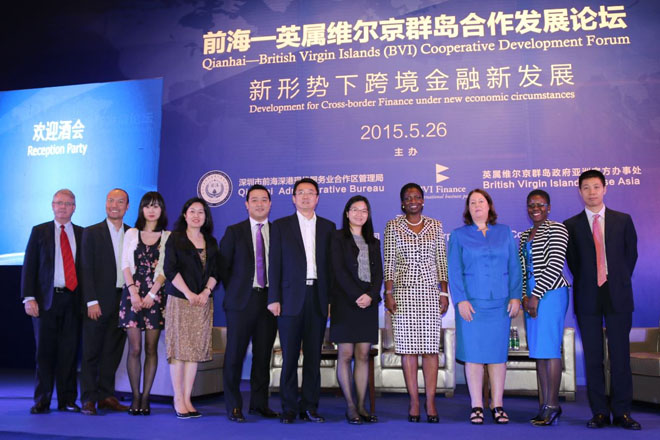 BVI continues to work with China to deepen business relationships

Shenzhen, China — The government of the British Virgin Islands has indicated that it is ready to continue to working with China in the deepening of business relations between the two countries.

This was highlighted during the recently held Qianhai-British Virgin Islands (BVI) Cooperative Development Forum in Shenzhen, China, on May 26.

Over 200 financial practitioners and enterprise representatives participated in the forum, which was themed, “Development for cross-border finance under new economic circumstances.” Topics related to the BVI business opportunities, legislation, and Qianhai-BVI cooperation were widely discussed.

The director listed the advantages of using BVI company structures and the diverse usage of BVI companies in asset protection and wealth/fund management and showed the BVI is ready to work with China to deepen bilateral relations and open a new era of future success.

Donovan said, “Qianhai has made remarkable strides in its economic development in a relatively short time, and the BVI’s proven track record in financial services provides a platform for success for the BVI-Qianhai relationship.”

A panel discussion titled “How to promote the interaction and development of Qianhai and BVI cross-border financial business” was held and the panel explored the topics of cooperation between Qianhai and the BVI.

BVI premier and minister of finance, Dr Orlando Smith, while reflecting on the outcome of the forum, stated, “The successful first official forum between Qianhai and the BVI creates a platform for mutual success going forward, and paves the way for further cooperation and development between the BVI and Qianhai.”

The British Virgin Islands is ranked as the leading offshore financial jurisdiction in the Global Financial Centres Index, and China continues to be the territory’s important partner in Asia.