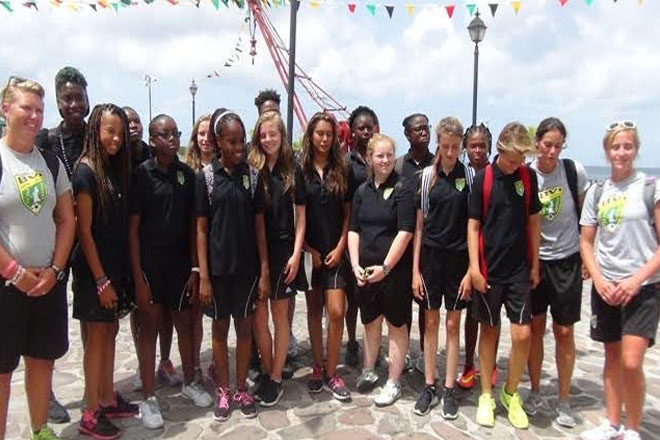 BVI Team and Officials in for Major Tournament

Sports Page — Everything is pretty much in place for the major Football tournament scheduled to commence in Nevis, starting this weekend.

The FIFA under 17 women’s Football qualifiers is set to kick off on Saturday 22nd August at 5.30 pm at the ET Willet Park.

On Thursday 20th August, there was more excitement at the Charlestown pier as the BVI team and the officials who will be in charge of the games, also arrived.

The BVI team arrived in the morning and the officials arrived during the afternoon.

The BVI team captain indicated in no uncertain terms that her team is not only here to participate in the tournament, but more significantly, to COMPETE.

The team is quietly confident that they will out front by the time the tournament concludes.

The officials on the other hand, all indicated that they expect a high standard of play during the course of the tournament and urged the Nevisian public to come out in their numbers to witness some exciting Football.

Among them is Princess Browne of Jamaica, an Asst Referee who recently officiated in a world cup tournament in Canada.

She noted that the experience taught her quite a lot and has helped her to improve as an official of the game.

The first game will be played on Saturday 22nd August at 5:30pm between Trinidad & Tobago and Dominica, while at 8:00pm St Kitts-Nevis hosts the British Virgin Islands.

The last set of games will be played on Wednesday August 26th when British Virgin Islands tackles Dominica at 5:00pm and St. Kitts-Nevis challenges Trinidad & Tobago at 8:00pm.

Football fans on Nevis will be holding their breaths however, as Hurricane Danny is expected to make landfall sometime around Monday 24th August.