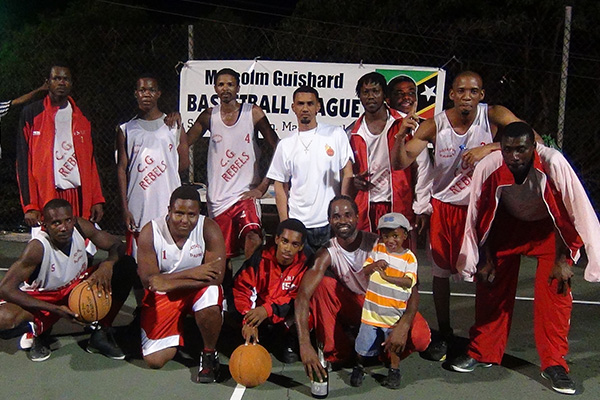 C G Rebels does it again

Basseterre, St. Kitts — The Cotton Ground Rebels are the 2013 champions in the Malcolm Guishard Basketball league.
The accomplished the feat on Sunday evening-24th November in front of a small crowd when they got the better of the Bronx Crisis team in a hard fought contest, worthy of a finals.

At the end of the third quarter, the CG Rebels team had a comfortable lead with the score line 65 to 53 in their favour. However, the Crisis team took full control of the first few minutes of the final quarter and soon it was match on with the Bronx team pulling back the score to within two points of the CG team.

However, the experienced men from Cotton Ground dug deep and managed to hold off the Bronx men to the final whistle with a lead of 8 points

CG Rebels the 2013 champions of the Malcolm Guishard basketball league