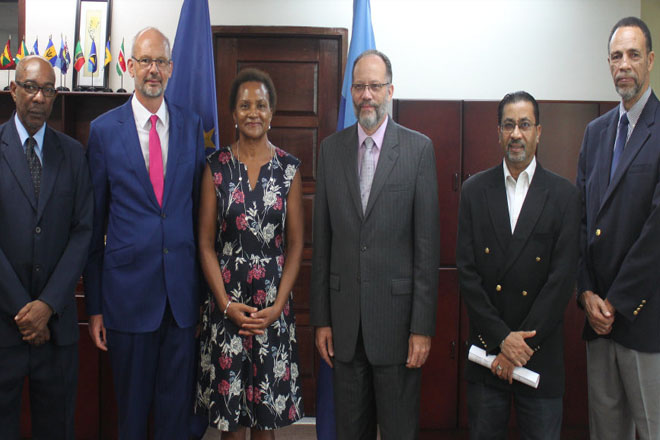 Call for more political dialogue between CARICOM and EU’

Georgetown, Guyana — The need for greater political dialogue and co-operation between the Caribbean Community (CARICOM) and the European Union was emphasised as the new EU ambassador to CARICOM presented his credentials on Wednesday.

Noting that the EU had launched a consultation on the future of their relations with the African Caribbean Group of Countries (ACP), the secretary-general stated that the partnership between the two sides should be expanded to “take into account the common challenges and interests that we all share.”

LaRocque took the opportunity to raise a particular matter of great concern to CARICOM leaders. He referred to the citizens of the Dominican Republic, primarily of Haitian descent, who had been rendered stateless by a ruling of the Constitutional Court. He recalled a decision of the high level meeting of the Caribbean Forum of ACP States (CARIFORUM) and the EU in Brussels last June, which proposed a monitoring mechanism with respect to the situation of those persons. He said the proposal was being pursued as the mechanism was very necessary and the EU’s influence “could be critical in its establishment.”

The secretary-general praised the EU for its significant role in the Community’s quest for sustainable development. He also thanked them for their assistance to Dominica, Saint Lucia and St Vincent and the Grenadines in the wake of the natural disasters that affected the islands. He also pointed out that such assistance would be welcome for The Bahamas as they coped with the aftermath of Hurricane Joaquin.

Referring to the two major international conferences that have taken place this year, the Third International Conference on Financing for Development and the UN Post 2015 Development Agenda which approved the Sustainable Development Goals, the secretary-general emphasised that access to development financing would be critical for the Region to achieve the Goals.

LaRocque called on the EU to support the Community’s position that criteria for access to such funding should be expanded beyond GDP per capita to include vulnerability in particular.

Barfod said he was convinced that the only “effective, sustainable way to address the issue of vulnerability” of the region was integration.

“The real weakness is smallness and the only way out is to share resources and work together,” he stated.

The EU ambassador pointed out that next week would mark seven years since the signing of the Economic Partnership Agreement (EPA) and more must be done to ensure that increased access to the EU market was transformed into increased presence.

The new plenipotentiary representative said the relationship between CARICOM and the EU was one that was between “two of the most advanced integration processes in the world.”