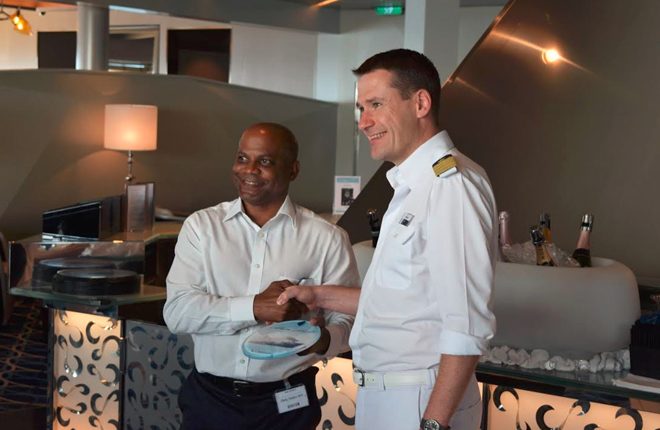 (SKNIS): Basseterre’s Port Zante has come in for high praise from Captain Jens Troier of The MS Mein Schiff 4, who during the customary plaque exchange ceremony for inaugural cruise ship calls, said, “Basseterre is a very good destination and very highly appreciated by our company (TUI Cruises) and we like to call on it as we have done many times in the past and of course for the future as we look forward to seeing you all very soon in near future.”

Captain Troier, indicating that he was somewhat disheartened that the Mein Schiff 4 was only scheduled for one call during this tourism season, said he is thankful for the usual warm welcome and that it is unfortunate that “we have to say hello and bye bye all at once.”

Welcoming Captain Troier and his crew to St. Kitts, Minister of Tourism, the Honourable Lindsay Grant, indicated that the MS Mein Schiff 4 is “the fourth of your sister ships to visit our shores”, noting that, “we had one, two and three before and we are due to have Mein Schiff 5 on April 12.”

The tourism minister said that St. Kitts is “a wonderful destination,” adding that during a visit to the TUI Cruises offices earlier in 2016, the company’s officials said “we are almost there in terms of being a marquee port.”

He further stated that his ministry is working arduously to ensure that St. Kitts becomes “the best destination not only for cruises but for stay overs.”

According to the St. Kitts Tourism Authority a total of 16 ships will make inaugural calls to St. Kitts during the 2016-17 season, which is expected to be another record breaking season with a projected 1,125,927 passengers, from 391 cruise ship calls.