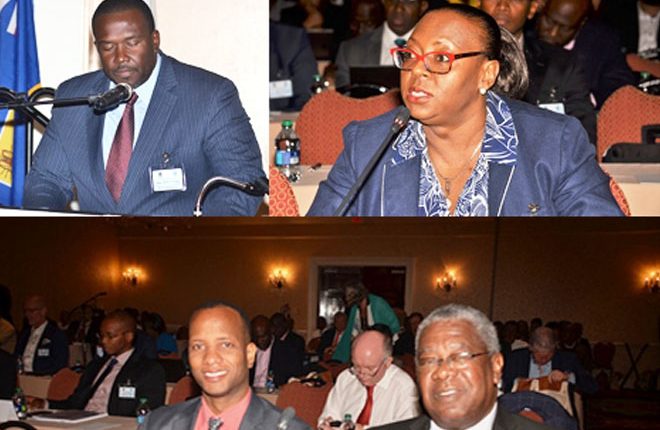 Basseterre, St. Kitts, September 28, 2018 (SKNIS): Information and Communication Technology (ICT) Ministers from across the Caribbean region endorse the idea for enhancement of a Single ICT Space, as it is important to streamline economic development to promote a common identity via travel that facilitates integration of culture.

This was echoed during a question and answer session at the 17th Caribbean Ministerial Strategic ICT Seminar, as part of ICT Week – St. Kitts and Nevis, currently being held at the St. Kitts Marriott Resort, where ministers spoke about the biggest challenge in accomplishing the Single ICT Space objectives by 2021.

“In many ways, we do have Single ICT Space in our region – our service providers. If I make a query today, I get answered in Jamaica or Saint Lucia depending on which service provider I am using and our service providers operate in the region as though it is a Single ICT Space,” said the Honourable Vincent Byron, Attorney General and Minister of Communications in St. Kitts and Nevis. “But our governments do not do so and I think it is an ingrained problem that we have had in terms of our relationships to CARICOM when we do meet, and the Caribbean Telecommunications Union (CTU) is a beautiful example of us coming together twice a year and we share things, but we do not see the same, either commercial or tangible benefits that we do.”

He added that this may be owing to not enough training and exchange taking place that are required to do things meaningful to the citizens and residents of each country.

The Honourable Kay McConney, Barbados’ Minister of Innovation, Science and Smart Technology, described the Single ICT Space as an enabler and noted that there has to be that collaborative approach by governments.

“What has to happen in the region is that we have to have a commitment to a bigger vision of how we as a region wish to show up in this new world that is evolving. I think lack of clarity about that vision and our place in this world as a region are central to us being able to go forward together, understanding that the Single ICT Space is simply an enabler to that vision,” said Minister McConney.

Similar sentiments were shared by the Junior Minister for Trade and Investment Promotion in the British Virgin Islands, Honourable Marlon Penn. He noted that commitment plays an important role in successfully implementing that Single ICT Space.

“It is just a matter of commitment. We have been talking about this a lot from the policy level, from the regional level we just haven’t committed. There needs to be a level of commitment to move forward and also commitment of financial resources on a local level,” he said. “Most times IT seems to be the call center for us as the driver for revenue generation and we don’t give it enough importance that it deserves in the whole budgetary process so it needs to be a commitment from the financial resources as well.”

The junior minister added that policy makers across the region have to commit to the process moving forward not just in talking but also in the budgetary process so as to get access to the monies needed to move the initiative forward.