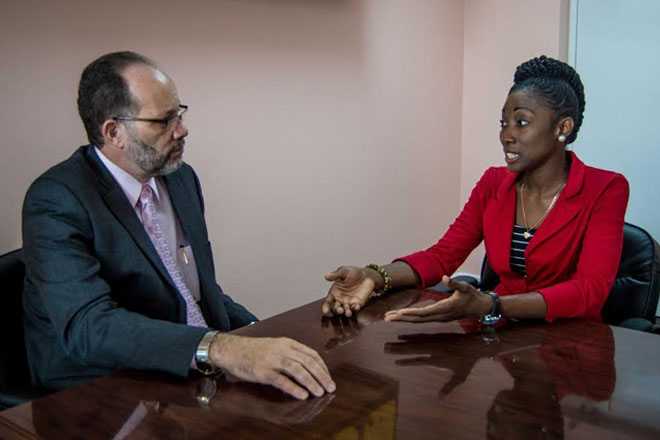 During the meeting, Ambassador La Rocque was updated on the work the youth ambassador was doing to aid in youth development and he also gained insight on her thoughts, as to how the Caricom Youth Ambassador Programme could be strengthened, to bring more benefits to the youth of the region. They also discussed some of the most pressing issues affecting young people which included crime and violence, and the need to secure more funding for capacity building initiatives for young people.

Ambassador Boddie, capitalized on the opportunity to praise and thank the Caricom Secretariat for recently holding a Caribbean Single Market and Economy Spokesperson training on island, in which she was able to participate. She hailed the two day training as “ timely, informative and top notch, as it not only armed participants with information, but provided practical experience in the area of making and delivering power point presentations, doing speeches and conducting TV interviews.”

According to Boddie, “the meeting was very productive and I am pleased that the Secretary General would have taken time out of his busy schedule on island, to meet with me. It certainly demonstrates that indeed, we the youth, are a priority for the Caricom Secretariat and what we say and do matters.”