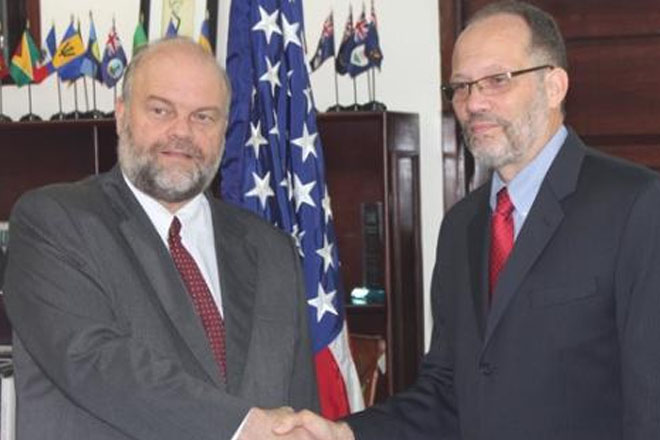 The secretary-general, in remarks at the accreditation ceremony, highlighted the important collaboration on the troubling issue of security, with the Caribbean serving as a transit point for the drug trade between the producer and consuming countries. The drug trade, he stressed, has resulted in the proliferation and use of small arms and light weapons by criminal elements across the Community.

LaRocque recognized US support in health including the fight against HIV/AIDS through the Global Fund and the US President’s Emergency Fund for Aids Relief (PEPFAR). He also welcomed backing for the energy sector including the proposal to establish the Caribbean and Central American Energy Security Task Force, and the US$20 million fund for energy related projects, announced by President Obama at the CARICOM-US Summit in Jamaica in April.

He said the region’s strong push for a binding agreement on climate change at the global COP21 Climate conference in Paris this December needs strong voices of support, and he welcomed the US president’s advocacy on this matter.

Holloway expressed US commitment to working closely with the region to advance the shared goal of combating organized crime. He said the Caribbean Basin Security Initiative, launched in 2010, has brought benefits both in terms of reducing narcotics flows through the Caribbean and enhancing the personal security of Caribbean citizens.

The new CARICOM ambassador expects the regional energy task force to revitalize cooperation between the US and Caribbean private sector investors to tackle the energy and environment challenges facing the region. The benefits, he said, will go beyond economic benefit and help combat global climate change.