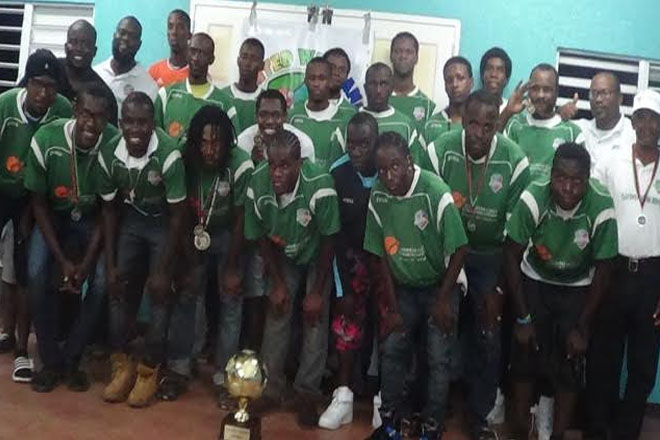 Sports Page — It was the motorcade of motorcades. There were only smiles, cheers and happy faces, as the CCC Bath United Football Club, celebrated in a grand way, their recent victory in the SKNFA division one competition. Even more so, they were celebrating their promotion to the premier league for next year.

The club celebrated on Saturday 6th June with a grand motorcade which commenced at Bath village, quite naturally, headed towards the roundabout next to Delta Petroleum; through Government Road; through Craddock Road and then through Jessups, the home of one of the star players, Dale Farrell and then culminating in Bath village, where the truck, complete with team members and a DJ made several rounds throughout the village.

Coach Alex Claxton was elated. He noted: ‘The fellas deserve this. They have worked hard.’

President of the club, Gareth Hunkins managed through the din to express his congratulations to the team and said it was nice to be part of something as good as this.

Vice president Jamir Claxton, in expressing his delight, noted that ‘you have to be a part of this to understand the feeling.’ He said that the fans can expect bigger and better things when they step up to the ‘premier’ next year.

The happy team members posed for a photo and then the food, drinks and music, flowed freely at the Albertha Payne Community Center at Bath village, throughout the night.

It did not appear that anybody was going home soon…