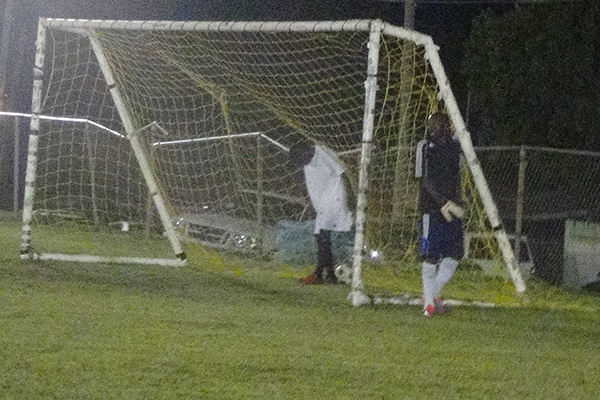 The last time the two teams met, it ended in a virtually embarrassing situation for the more highly rated CCC Bath United team.  They were leading the All Stars team by a margin of 2 goals to nil at half time but the All Stars team came back in the second half and scored 2 goals of their own to draw the game.

Coach/Manager of the CCC Bath United team, Alex Claxton even though grudgingly giving credit for some good ball skills by the All Stars team, was disappointed that his team allowed them to catch up.

When the two teams met on Sunday 22nd December, it was obvious that Claxton had given his team clear instructions.  By the time the first half was completed, the Bath team had already struck the back of the net no fewer than five teams without the ghost of a whisper from the All stars players who started to appear frustrated and disorganized.

More goals could have been scored too had it not been for some serious work by the All Stars defenders, led by Curtis Morton Jr.

When the game ended it was the CCC Bath team that was smiling with a score line of 7 goals to 2.  One of the All stars players was given a red card, while yet another voluntarily walked off the field in disgust.

In the previous match of the evening, a depleted Villa Int team was taken to the wars by a domineering Highlights Int team which continued its winning ways, having not lost a match all season.

The Villa team started with seven players and due to injury towards the end of the game, ended with five.

The Highlights men scored 9 goals to their 1 and had they not messed up the finishing touches, could have scored at least another 9.

On the previous night, Saturday 21st December, the Bronx United team took care of Hardtimes even though the latter team played some of their best ball for the season.  The final score: 4 goals to 2 in favour of Brantley Bronx United.

Here is a summary of the matches played on the weekend:

Scorers for this game to be published later

The league will now take a break for the Christmas season and resume on January 4th 2014.

The Nevis Football Association would like to wish everyone a Merry Christmas and a happy New Year.