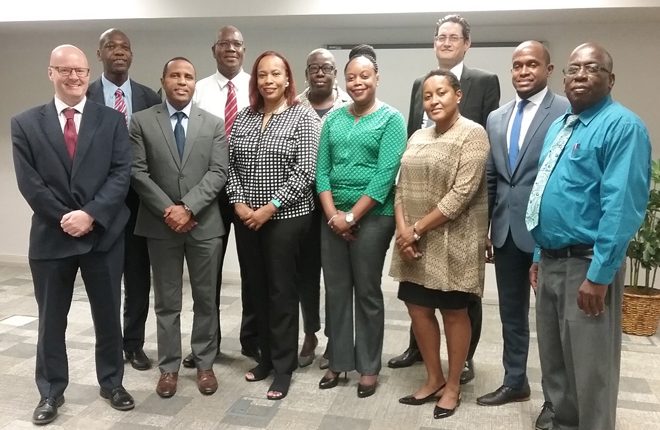 October 9, 2017, BASSETERRE, St. Kitts and Nevis – A team from the Caribbean Development Bank (CDB) visited the Federation of St. Kitts and Nevis from October 2 to 6 to discuss the country’s development priorities, and to determine the main areas of intervention that CDB could support over the period 2017 to 2021.

While in St. Kitts and Nevis, the Bank’s delegation met with Government officials and representatives from the private sector. The discussions also focused on the country’s key development challenges; and the role and work of other development partners who provide support to St. Kitts and Nevis. At the end of the mission, the Bank’s delegation, headed by Director of Economics, Dr. Justin Ram, met with a team of Government officials led by Financial Secretary, Hilary Hazel.

Dr. Ram noted: “Given the priorities that have been identified during this visit, CDB is likely to support St. Kitts and Nevis in key areas of national development that are critical for economic growth and social development.”

These areas could include assisting the Federation with developing a new National Vision document and Medium-Term Development Strategy, complemented by detailed implementation guidelines. In addition, the CDB team held constructive discussions with the Government of St. Kitts and Nevis about the need for measures to improve overall project implementation. The Bank offered its support for the establishment of a delivery unit to accelerate implementation towards the achievement of the Government’s key development objectives.

Other areas of possible intervention include:

In close consultation with the Government of St. Kitts and Nevis, CDB will draft a Country Strategy Paper, which is scheduled for presentation to the Bank’s Board of Directors for approval in December 2017.

The Paper will be aligned with the Bank’s strategic objectives and the country’s National Adaptation Strategy (2006 to 2013), which has been extended to 2017.