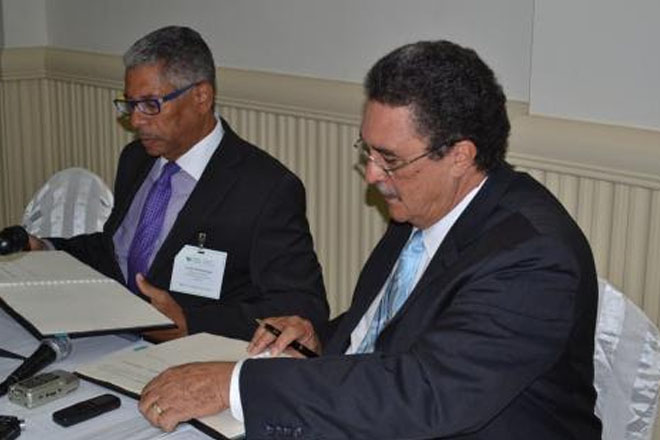 Castries, St Lucia — The government of Saint Lucia has signed a grant agreement with the CARICOM Development Fund (CDF) for funding of the St Lucia National Trust (SLNT) renewable energy project in the sum of 71,749 Euros.

The agreement was signed by prime minister, Dr Kenny Anthony, and Lorne McDonough, chief executive officer of the CDF and the fund will provide lighting solutions for the Pigeon Island National Park, in keeping with one of the CDF’s principal themes – environmental preservation.

The lighting solutions were designed to run strictly on Solar PV modules backed up by 12/24VDC battery banks. The use of solar lighting was initiated by the SLNT and the funding would contribute to the expansion of the use of PV lighting.

At the signing ceremony, McDonough announced his departure from the post of CEO of the CDF at the end of the month and thanked the prime minister and the government of Saint Lucia for their support over the years during his tenure as head of the CDF.

“I am especially pleased to sign this agreement as it reflects the philosophy of the CDF to tenaciously wrestle a problem until a solution within the rules and consistent with good governance practices is found. I am optimistic about this facility for the SLNT.

“This along with other agreements signed between the government of Saint Lucia and the CDF for projects totaling EC$16.43 million or US$6.09 million (EC$1=US$2.70) means that in total the government of Saint Lucia, with a contribution of US$2.4 million, was able to obtain for projects it prioritized, an additional US$2.54 for every US$1.00 contributed making good the promise of returning to disadvantaged countries interest free all of their contributions and then some.”

Anthony thanked McDonough for his leadership at the CDF and for his support of the CAP for Saint Lucia and wished him the very best in his future endeavours.