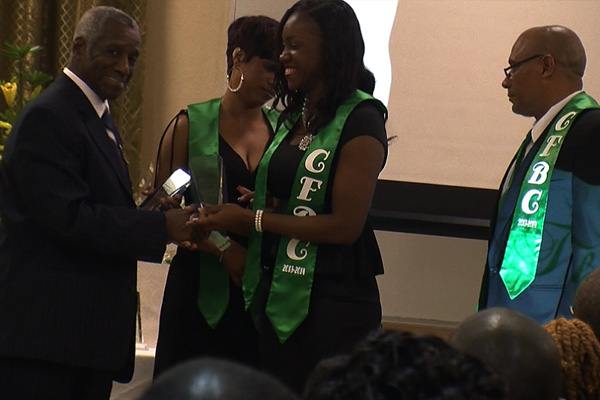 (ZIZ) — Twenty-five business supervisors and managers are now equipped to undertake workplace challenges thanks to a Leadership Course organized by the Clarence Fitzroy Bryant College [CFBC] and Jenkins Limited.

The graduation ceremony was held Wednesday evening at the hospitality wing of the CFB College on Burdon Street.

The participants expressed gratitude to the organizers and recapped the importance of the course.

Course graduate, Dentrecia Blanchette said, “our minds were stretched, our skills were sharpened, our intellects were stimulated, our ideals were challenged, we made the sacrifice and we were developed and refreshed.”

President of CFBC, Dr. Kelvin Daly in his presentation congratulated the participants and gave them some sound advice.

“At all times act with fairness, honesty and integrity, even if it means being contrary to the popular sentiments at the time. You will draw immense strength from the selflessness of your actions.”

This year’s graduation was held under the theme, “Leadership Excellence: Leading with Purpose, Principle and Passion.”

Chairman of TDC Group of Companies, Earl Kelly, presented the feature address in which he defined leadership.

“Leaders are people who raise the standards by which they judge others and by which they are willing to be judged. Make no mistake about it though, leadership is an honour that often requires sacrifice.”