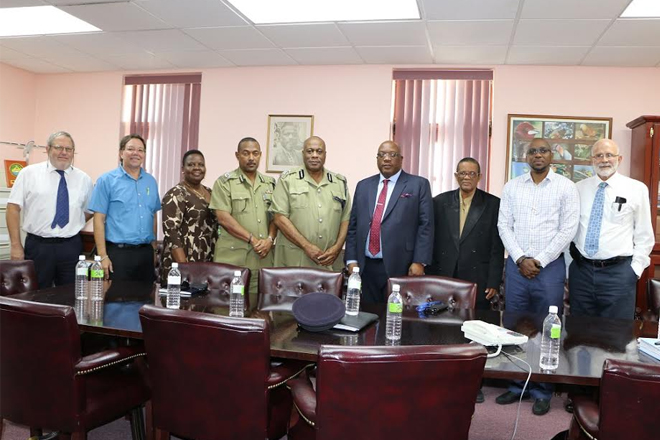 Chamber of Industry and Commerce collaborates with Government in crime reduction

(SKNIS)—Members from the Chamber of Industry and Commerce (CIC) and the Police High Command met with Prime Minister and Minister of National Security, Dr. the Honourable Timothy Harris on February 04 at Government Headquarters to address the burning issue of crime.

Damion Hobson, President of the CIC, and members of the CIC Mark Wilkin and Emile Ferdinand Q.C., shared concerns with the Minister of National Security about the state of crime in the Federation and the negative impact that it can have on the business sector, investment climate and the economy on a whole.

Prime Minister Harris encouraged the CIC to implore the business community to take security measures in purchasing security equipment, while he pledged the Government’s support in providing concessions to those businesses that do so. The prime minister also told the members of the CIC that the country was in an advanced stage of adaptation of closed-circuit television (CCTV). He also impressed upon the Chamber to encourage the independent media to practice balanced journalism in its reporting on crime. Understanding the gravity of the problem, the CIC pledged its commitment and support to the Government.

The CIC was also afforded the opportunity to hear from the High Command with respect to what the police was doing in the country to stem crime from Acting Commissioner of Police, Mr. Stafford Liburd, Assistant Commissioner of Police responsible for crime, Mr. Ian Queeley, Superintendent Merclyn Hughes, Permanent Secretary in the Ministry of National Security, Mr. Osmond Petty and Mr. Dave King of the Bramshill Policing Advisors.