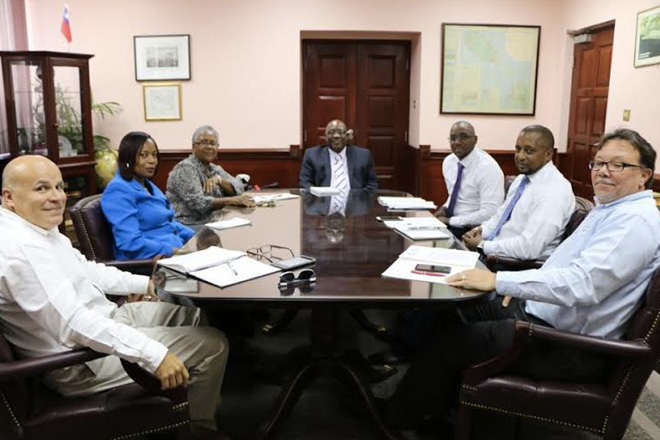 Chamber of Industry and Commerce expresses confidence in PM Harris

The meeting was the first such formal meeting between Prime Minister Harris and the Chamber’s membership. President of the Chamber, Damion Hobson was accompanied by Nick Menon, representing the St. Kitts and Nevis Hotel and Tourism Association, Jose Rosa representing the Chamber’s Manufacturing Division and Mark Wilkin. Others present at the meeting were Financial Secretary, Hillary Hazel, Attorney General Honourable Vincent Byron and Josephine Huggins, Cabinet Secretary.

Topics discussed included how to foster a stronger relationship between the private sector and government, matters of national interest such as law and order and the Citizenship by Investment Programme, as well as follow up on the Manufacturing Strategy and fiscal policy. The Chamber representatives applauded the Government’s decision on that bold move.

Commenting on the meeting, Chamber President Damion Hobson stated, “It was a very productive meeting, we brought some issues to the Prime Minister’s attention that we needed to have addressed, and we have decided to follow up on those concerns in a July meeting. We look forward to continuing dialogue on matters of mutual interest,” he added.

“I want to thank the Chamber for coming today,” Prime Minister Harris said. “We have had amicable discussions, and I have committed myself to being available for consultations as we move forward. I want to thank them for their confidence in the government. Through strong partnership between ourselves and the Chamber of Industry and Commerce, we can take our country to the next phase of progressive development for all our people”