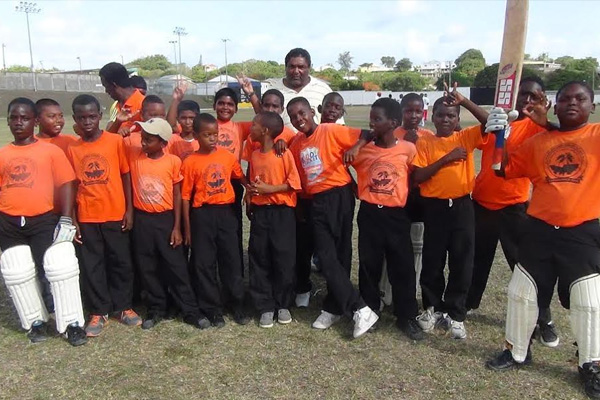 Sports Page— It was a game that generated quite a bit of hype and spectators showed up early to witness the grand finals in the 2014 TDC sponsored Primary Schools’ cricket championship. The two teams in focus were the Charlestown Primary School and the ‘new kids on the block,’ the combined Maude Cross Preparatory and Nevis Academy Schools.

The match was played at the ET Willet Park on Tuesday 7th July. The match started a bit late as the Charlestown team arrived a little late, fresh from their annual school picnic.

The CPS team won the toss and Captain Jahvian Barrett immediately indicated that he would send in the opposition to bat, as his team would chase.

The combined team’s captain Ardie Liburd also indicated that had he won the toss, he would have batted anyway. Both captains seemed confident of victory.

However, absolutely nobody was prepared for what would happen next.

Carlon Tuckett, son of former West Indies all rounder Carl Tuckett, was the only stand out batsman, helped in a significant little partnership with Andy Long (of Chinese origin) and who excited the crowd with his defiant play.

Tuckett remained positive throughout and one particular straight drive down the ground, was a rare gem.

He however, much to his chagrin, was like the proverbial cheese standing alone when the last wicket fell.

Except for an early run out, there were no real hiccups for the CPS team as they raced towards the target with Tejari Clarke batting really well to be not out at the end.

The entire CPS team raced onto the field in jubilation.

Veteran Coach Elquemedo Willet warmly congratulated his team and sounded an ominous note of warning. He pointed out that except for the captain Barrett, the entire team plus new players, will be available to the school, next year.

Tejari Clarke 4 wickets for 12 runs; Jaden Carmichael 2 for 9 and Cael Maynard 2 for 4

Charlestown Primary won by all of 9 wickets, securing championship honours for 2014.

A closing ceremony is being planned for Friday 11th July.