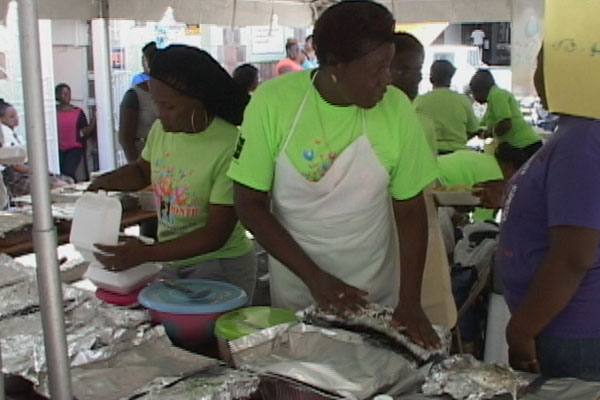 Basseterre, St. Kitts (SKNIS): There was much fun and excitement at the annual Child Month Food Fair on June 12 as children and adults gathered around to get their fill of what patrons called nourishment for young minds and even adults.

“The food fair was a success” says organizer of the event Icilma Williams. She added that the fair was well attended as there was an overwhelming amount of persons coming to the stalls.

One of the patrons, Stanley Franks, stated that it was important to hold the event.

“I think it is important to support children’s efforts and so I’ve come to purchase some food,” Mr. Franks stated.

Some of the dishes included goat-water, chicken, fish, corn meal and steamed fish, salt-fish and johnny-cakes, casseroles and a wide variety of deserts. Both public and private institutions participated in preparing the dishes.

Child Month has been taking place every June for 30 years. In commemoration of this accomplishment, the activities have been centred on the theme “Child Month at 30 – Celebrating Our Achievements.”

Charlene Gumbs shared what she thought about this year’s child month activities.

“Seeing the line up I think it’s going very good,” she stated. “I’ve been to a few of them and they were very educational.”