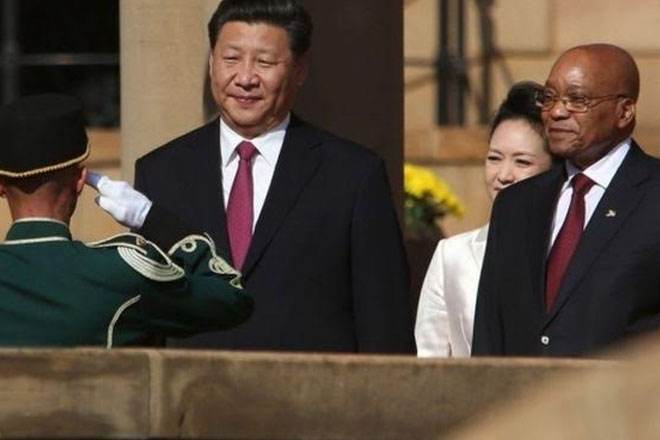 (BBC) China has announced $60bn (£40bn) of assistance and loans for Africa to help with the development of the continent.

President Xi Jinping said the package would include zero-interest loans as well as scholarships and training for thousands of Africans.

The Chinese leader made the announcement at a major summit between China and Africa in Johannesburg.

The momentum of rapid growth in Africa was “unstoppable”, Mr Xi told more than 35 African heads of state.

China’s announcement of grants, loans and development funds was widely anticipated, although the figure exceeded expectations.

Much of this additional assistance is likely to be focused on infrastructure projects, to help boost economic development but more details on the deal are yet to emerge.

President Zuma said that China and the African continent each made up a third of the world’s population, bringing the possibility of new markets and production possibilities.

But perhaps one of the biggest challenges African countries face is youth unemployment and leaders are under pressure to come up with development plans which create more jobs.

Despite a major slowdown at home, which has seen Chinese demand for African exports plummet – a vital source of foreign exchange earnings for the continent – the main message is that despite economic challenges, China’s commitment to Africa is long term.

The two-day Forum on China-Africa Cooperation (Focac) is the second time China has brought together African leaders since the forum was launched in Beijing in 2000.

According to China’s official Xinhua news agency, the assistance over three years will focus on 10 areas, including industrialisation, the modernisation of agricultural, financial services, green development and peace and security.

Mr Xi said this was his seventh visit to Africa and his second as Chinese president and on each trip he saw progress and change.

“The late Nelson Mandela of South Africa once said: ‘We stand at the dawn of an African century, a century where Africa will take its rightful place among the nations of the world.’

“I couldn’t agree more with this statement and I am convinced that African countries and people are embracing a new era that is truly theirs,” the Chinese leader said.