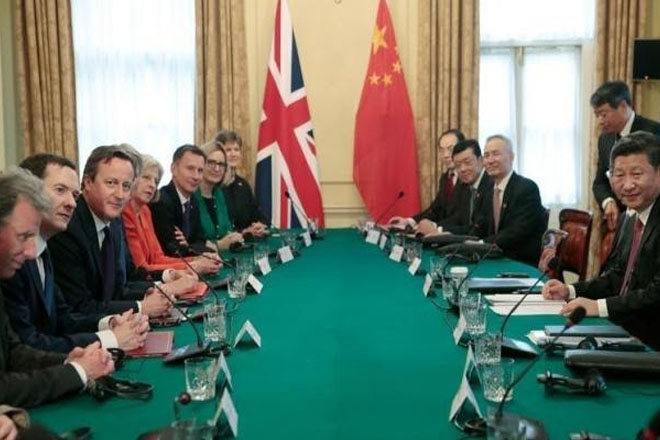 After a day of pomp, Communist Party General Secretary Xi on Wednesday turned from pageantry to discussion of 40 billion pounds’ ($62 billion) worth of deals with Cameron in his Downing Street residence, where a landmark nuclear deal was signed.

In the first major Chinese investment in a Western nuclear facility, China’s General Nuclear Corporation (CGN) will take a one-third stake in the planned 18 billion-pound ($28 billion) Hinkley Point nuclear plant, to be owned by France’s EDF.

State-owned CGN will also take a two-thirds stake in the Bradwell nuclear plant east of London, where it plans to build a Chinese-designed reactor, and a one-fifth stake in a project for Areva designed reactors at the Sizewell plant.

“We will build a global, comprehensive strategic partnership between our countries in the 21st Century and jointly open up a golden era,” Xi told reporters via a translator, adding that the nuclear deal was a flagship investment.

Cameron is pitching Britain as the pre-eminent Western gateway for investment from China, though the warmth of the reception for Xi has raised some eyebrows with allies and drawn criticism that London is ignoring China’s human rights record.

Protests on the street against the Communist leader have been small so far, despite activists accusing Cameron of courting Chinese money while brushing aside criticism of a crackdown in civil liberties since Xi came to power in 2012.

British officials and business leaders say the rise of China is impossible to ignore: China’s economy is four times the size of Britain’s.

When a BBC reporter asked Xi at a briefing whether Britain should be pleased to do business with an undemocratic country with a troubled relationship to human rights, Cameron said a strong commercial relationship was important.

“The stronger our relationship, the more able we are to have the necessary and frank discussions about other issues,” Cameron said, adding he had raised the oversupply of Chinese steel after over 4,000 jobs were thrown into jeopardy at steel plants across Britain in recent weeks.

Xi said China had taken steps to reduce iron and steel capacity and that China attached “great importance” to the protection of human rights.

“Looking around the world, there is always room for improvement,” Xi said of human rights. He later told a business audience that there would be no hard landing for China’s economy.

“The Chinese economy will maintain its strong momentum,” Xi said. “There will be no hard landing.”

China will take a 6-billion-pound stake in EDF’s Hinkley Point project in the southwestern English county of Somerset, due to be the first new nuclear plant to be built in the European Union since Japan’s Fukushima disaster in 2011.

The Chinese investment, agreed in principle in October 2013, breathes life into a British plan to replace around a quarter of its electricity generating capacity over the next decade. It offers China a way to showcase its nuclear technology as part of its pitch as a global exporter of quality infrastructure.

No overall figure was given for the Chinese nuclear investment. Britain said before the visit that a total of 30 billion pounds’ worth of contracts would be clinched, though Cameron upped the figure to 40 billion on Thursday.

The deal brings Britain’s first new nuclear plant since 1995 a step closer and is also a boost for EDF, which has been hit by billions of Euros of cost overruns and years of delays with two of its other European nuclear projects in Finland and France.

The prospect of China, which Western spymasters say sponsors hacking of global companies, helping to build a nuclear plant in Britain and being involved in running others has stoked security concerns.

Steve Hilton, a former policy adviser to David Cameron, told the BBC that Britain should impose sanctions on China for political oppression and cyber attacks instead of rolling out the red carpet.

“This is one of the worst national humiliations we’ve seen since we went cap-in-hand to the IMF in the 1970s,” said Hilton, referring to the 1976 crisis during which Britain was forced to ask for a loan from the International Monetary Fund.

“The truth is that China is a rogue state just as bad as Russia or Iran, and I just don’t understand why we’re sucking up to them rather than standing up to them as we should be.”

China has strongly denied previous accusations of espionage, saying it is itself a victim of cyber attacks.